Iowa takes on No. 4 Nebraska after a strong midweek game against No.22 Michigan. 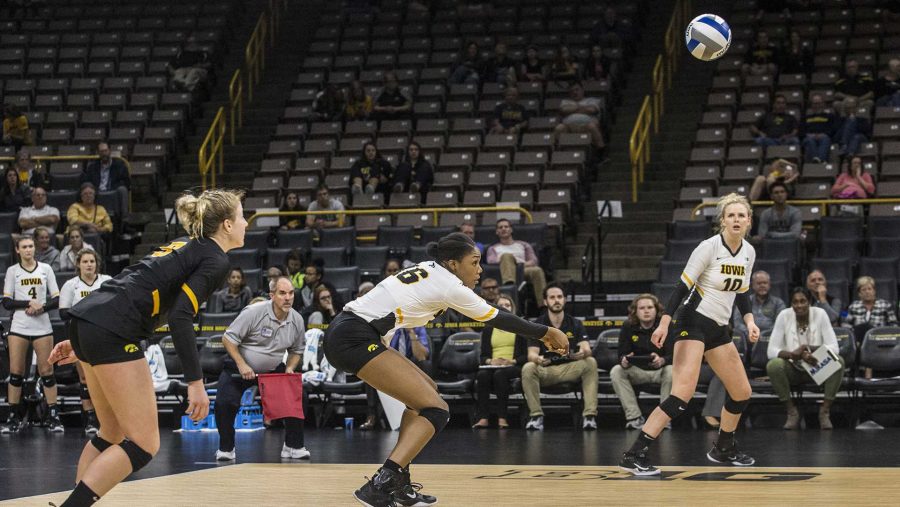 The Iowa volleyball team’s strong midweek match boosted its confidence going into today’s 7 p.m. match against No. 4 Nebraska in Carver-Hawkeye.

“I think that just gives us a little momentum going into Nebraska, especially this weekend, and we’re ready for a big upset,” junior right side hitter Reghan Coyle said.

The Cornhuskers are undefeated so far in the Big Ten after taking down Michigan State in four sets on Wednesday.

Repeating a strong offensive match will be the key, confidence-wise, for Iowa. Nebraska ranks 13th in the nation for holding its opponents to a .150 attack percentage.

A big takeaway from beating No. 22 Michigan on Wednesday was that the Iowa defense strung together points to extend their lead.

That will be key into playing another highly ranked team.

“Definitely paying attention to detail, and again, like I said, just leading with intensity, making sure we stay up when we are up, and capitalizing on the opportunities when we get them,” junior outside hitter Taylor Louis said.

Winning those consecutive points gives a certain boost in confidence that Iowa has lacked in previous matches.

“No team in the Big Ten is going to hand you points, so we just have to earn our points, and when we do that, we can string them together and gain momentum, and we do great,” Coyle said.

The Hawkeyes have continually focused on developing their game and not playing to what their opponent is doing.

Finding that identity on the court has made a difference in the way they play.

“I think really capitalizing on the little things that we can do on our side, because we did that [against Michigan], and I think that’s really going to carry us in the Big Ten,” Coyle said. “It’s just a matter of those kind of ugly points — who wins those — it’s kind of a determiner in the match.”

During practice in the short break between matches, Iowa will do what it always does.

“We’ll have our work cut out for us, but we’ve got three days to prepare, and I know our group will be ready,” Shymansky said.

Nebraska has always been a major match in Carver.

Although the Cornhuskers have never dropped a match to the Hawkeyes, leading the all-time series 24-0, the fans always come out to cheer. Last season’s match against Nebraska broke the single-match attendance record by more than 1,000.

Iowa expects to break that record again, with its goal at 5,000, in a mission named Operation 5K.

“We’ve had some really [good] things,” Shymansky said. “We had a booster that went out and bought 500 tickets to help us reach that goal — what an awesome thing to have happen for our program, just a way to show the support that they want us to succeed. That’s what true Hawkeye fans are all about.”