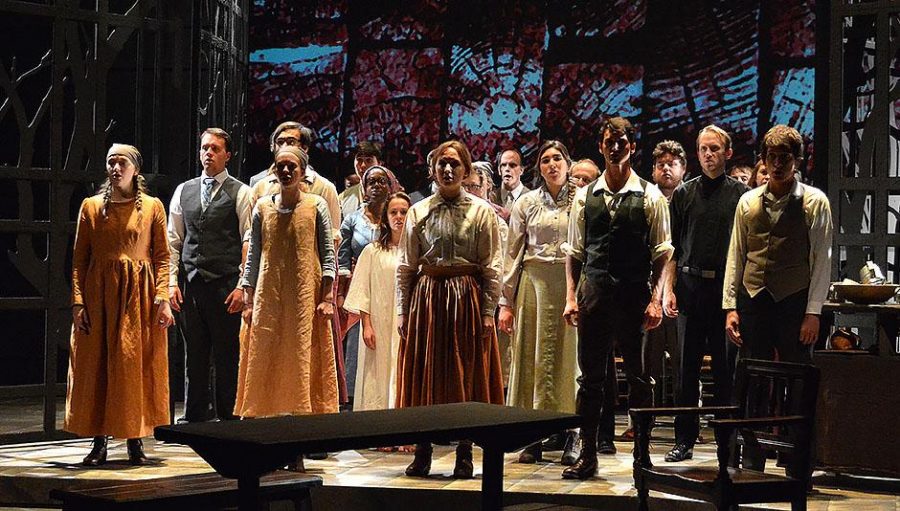 Since the beginning of the school year, several student actors have invested their time in putting together one the most popular American plays and finding joy in a grim piece.

The Crucible begins, perhaps simply enough, with a sick girl. This sick girl will soon transform an entire town beyond recognition, turning fearful neighbors against each other. But this is not an entirely fictional story. In fact, it is rooted in America’s history.

Arthur Miller’s The Crucible is based on the Salem, Massachussets, witch trials, which took place between February 1692 and May 1693 and left 20 people dead once it was all over.

The production at the University of Iowa was adapted by director Doug Scholz-Carlson, who is directing his first production for the university’s Theater Department. The show will begin its run at 8 p.m. Friday in Mabie Theater.

Working on the show since the beginning of the fall semester, Scholz-Carlson said he was excited when the opportunity finally fell on his lap.

“It seems like a perfect play in a post-truth world,” he said. “Right now, we’re dealing with this issue of what is the truth, and who do we believe, and what it means to be a good person. The play is very much about that, and what we’ve been figuring out as we’ve been rehearsing is there’s no one person in the play who’s at fault for what happens.”

Zach Twardowski, who is working toward an M.F.A., will play the conflicted Rev. John Proctor, said he enjoyed the challenge of being vulnerable while playing his character.

“I just resonate with this character in particular,” he said. “Not the specifics but just the struggles of facing yourself.”

Scholz-Carlson said he finds many artistic liberties in working with a traditional play.

“With a piece that’s established, you already know it works,” he said. “You already know somebody’s done a good production. In certain ways, it gives you more confidence to believe in the play. A lot of times, I think that leads you to a deeper understanding. For a theater artist, there’s a lot of creative work for something that’s already been done before. You have a lot of room to explore how you’ll present it to an audience.”

“You can almost do research and find different complexities that were hidden,” Lassen said. “One of my favorite things about acting is finding a character and uncovering who they are, and I think that’s really possible with this show.”

Emelia Asiedu, who is also working toward an M.F.A., will play the role of Elizabeth Proctor. She said she never read The Crucible until recently. Originally from Ghana, Asiedu said, she often heard her American friends raving about the play.

After finally reading the piece, Asiedu said, she became drawn to her character.

“Because of that duality that I find in [Elizabeth], maintaining her strength and also having this huge vulnerability, that’s something in my work that I’ve been trying to find, being able to put my heart out into a project,” Asiedu said. “I thought this would be a great challenge.”

With a cast of 28 actors, Twardowski said the large size helped establish a true community, both within and without the show.

“Trust has been a really big part of this production because of the community aspect,” he said. “I feel that more than I have in other shows. I feel really supported and connected to each person because they’re so pivotal in every aspect of the show.”

Although the piece is constantly performed in different theaters, Scholz-Carlson said, a familiar audience can gain a different perspective from seeing this performance.

“I think a lot of people feel like they know The Crucible, but I don’t think they do,” Scholz-Carlson said. “It’s really dynamic, it’s really timely, and it’s funny in places where I didn’t think it was going to be funny.”