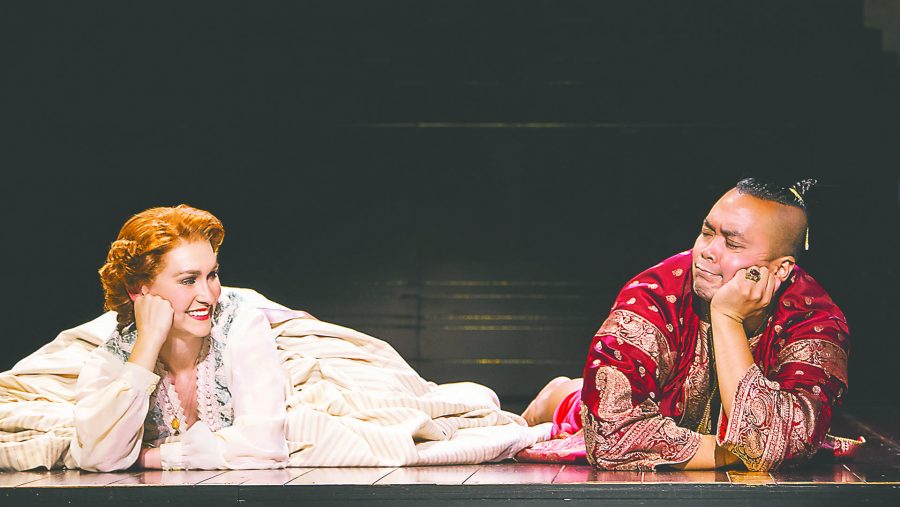 The King and I will sing and dance its way onto the Hancher stage from Oct. 10-14, gracing Iowa City with its timeless music and charm.

Generations of people have been swept away by the classic beauty of The King and I. Rodgers and Hammerstein’s musical was recently revived, and it will sweep into Hancher from Oct. 10-14.

The plot centers on a widowed English teacher named Anna Leonowens and her son, Louis. They are called to Siam by the king in order to teach the king’s wives and children English and to help ease Siam into a more modernized country.

Before meeting the king, the duo whistles a tune to help calm their nerves, but they needn’t have worried. While they did not have the slightest idea of the friendship that would form between Anna and the king, an even greater friendship was forged between the king and the world.

The King and I is known as a timeless classic, because of some of the motifs around leaders and their countries, said Hancher public-engagement coordinator Jesus Renteria.

“When you have a story that has the themes revolving around a leader of a country and his reluctance to integrate with the rest of the world, or forbidden love and the question of who has the right to choose to be with another person, these themes resonate with 2017 audiences in a different and interesting way,” he said.

It additionally illustrates themes of acceptance, learning, and friendship. Political affairs were a prominent theme because of colonization of Asia during the 1800s.

The friendship of the king and Anna is at times strained, other times happy and carefree. The tugging and pulling between the duo could represent the East and the West trying to get along. To understand and accept our differences is what friendship is about.

“Because of the king’s ability to extend a hand of friendship to a stranger, he was able to ward off colonization,” said actor Jose Llana, who plays the king.

In the scene with “Getting to Know You,” Anna, played by Heather Botts, shows the monarch’s children the beauty of acceptance.

“She really embodies that character that embraces uniqueness in every person,” said Joan Almedilla, who plays Lady Thiang, the king’s chief wife.

The musical includes some tunes that have proven themselves to be timeless: “Getting to Know You,” “Whistle a Happy Tune”, and “Shall We Dance” are just a few of the iconic songs.

“They are universal and humanistic,” Renteria said. “Their timelessness stems from the expertly crafted music and stories that bring relevant questions that still stir conversation in our contemporary culture.”

The King and I