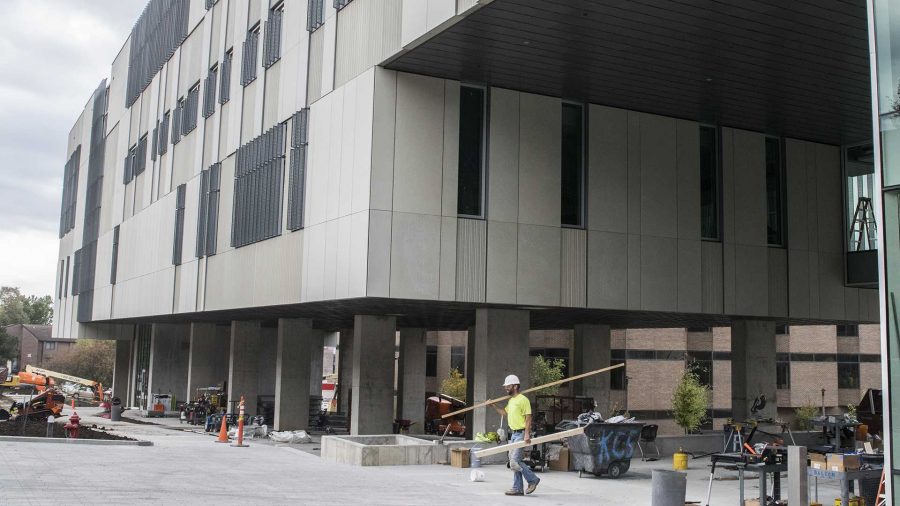 Modern architecture will meet history for the University of Iowa College of Engineering with the addition of a new annex on the south side of the Seamans Center.

Plastic-clad furniture sat in the hallway waiting to be placed in classrooms and study spaces, and the scent of a brand-new building permeated the air as construction workers put the final touches on the annex in preparation for its opening after nearly two years of construction. Alumni can tour, RSVP-only, on Friday.

The 65,000-square-foot addition will expand the building to answer the need for more space. The new facility will begin holding classes in the spring 2018 semester.

UI engineering student Dylan Gardner said he has noticed a large difference in class sizes between his class and the freshman class and he believes the Seamans Center was in need of expansion.

“That’s where I do all of my studying, basically, and it seems like it’s always busy,” Gardner said. “It’s even hard to just try to find a place to sit down and study.”

The cost of the project was $37 million, paid for by donors, the UI, and college research centers, according to the engineering-school website.

Sustainability was a large part of the project, starting with the construction, in which environmentally friendly methods of waste removal were used, UI officials said.

UI officials said the new annex also features plant-covered rooftops and biocells on the walkway toward Madison Street that will work with the green rooftops to absorb rainwater.

Additionally, the new annex offers many features such as hearing loop systems in the new classrooms, a walkway that connects the Seamans Center to the Lindquist Center, and a lobby that will be open 24/7 to allow access to an elevator that partially goes down the hill between Capitol Street and Madison Street.

Students will also be able to access data on how the building is running and can use that as a learning experience, building project coordinator Doug Eltoft said.

“All of the energy use individually in all the classrooms is metered in a way that student projects can connect with the building,” Engineering Dean Alec Scranton told The Daily Iowan. “It can become a living laboratory in its own right where the very building and the very rooms where people are taking classes, there’s something they could investigate.”

Eltoft noted that students will receive homework requiring them to use the experiment lab, an additional feature in the annex, as a hands-on learning experience.

Associate Professor of mechanical and industrial engineering James Buchholz said the development of a fluids lab in the experiment lab was made possible with a $1 million from the Roy J. Carver Charitable Trust. The laboratory will allow students to understand the principles they learn in the classroom, he said.

“Students will have access to state-of-the-art instrumentation,” Buchholz said. “We’ve got some really cool stuff coming in.”

Buchholz said he believes the advancements in technology in the laboratory will make the UI more attractive to prospective students.