Two existing drugs were found in a University of Iowa study that are able to be used in collaboration with chemo as therapy for chronic myeloid leukemia. 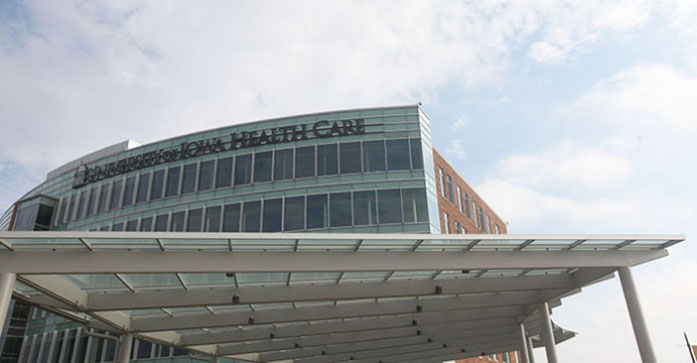 The University of Iowa Health Care building is seen on Wednesday, Oct. 1, 2015.

A study performed at the University of Iowa has used mice to find a new therapy for chronic myeloid leukemia, a cancer that is estimated to have affected 8,950 people in 2017.

The leukemia is fairly easy to treat when it is in in initial stage by using tyrosine kinase inhibitors. The problem with this treatment is that is has to continue to be used for the entire patient’s lifetime and doesn’t always stop the progression of the cancer.

The reason is TKI can kill bulk leukemia cells, but there is another kind of tumor cell, leukemia stem cells, which TKI and chemotherapy cannot kill.

Hai-Hui Xue, a UI professor of microbiology and immunology and the lead researcher of the study, collaborated with his team and Chen Zhao, a UI assistant professor of pathology, and they started this study four to five years ago by looking for small molecules or drugs that could destroy the leukemia stem cells.

In the process, they found by genetically deleting two proteins, Tcf1 and Lef1, they could severely impair the leukemia stem cells while having no effect on normal blood stem cells.

From here, they started to look for small molecules or drugs that could copy the gene-expression pattern that came about when the proteins were removed. Xue said that they “found quite a few candidates.” However, they zoomed in on two small molecules, PGE1 and misoprostol.

Fengyin Li, also with UI Health Care, said “through query the connectivity map database, we found several possible drugs, but only the PGE1 worked. Later, we found its analog misoprostol has a similar effect.”

PGE1 is an injectable drug that treats erectile dysfunction, and misoprostol treats ulcers. Because both of the drugs are already used in humans, they are already approved by the FDA.

Xue said that while simulations on the mice were easy to do, testing the drugs on real human stem cells presented a slight hold-up. To do this, they needed to get stem cells from humans. This proved difficult because there is a small population of people with this disease and an especially small population here in Iowa. It took them awhile to get the samples they needed.

Hematologist Steven Lentz played the role of “identify[ing] patients with CML who volunteered to provide blood or bone-marrow samples for the study.”

Xue said he “has really high hopes of using this knowledge in a clinical trial.” He has worked with doctors at the clinic to push this forward and figure out what patient group to target.

“I am not concerned about safety,” Xue said, “We just need to find funding.”

Li spoke about the clinical trial as well, saying, “The biosafety is already known, but the dosage needs to be optimized still.”

Lentz does show concern about safety, saying, “We will be monitoring patients closely for side effects when the drugs are used along with standard treatments for CML.” Yet he also pointed out that because the drugs are already used safely in humans, he hopes that there will be minimal adverse effects.