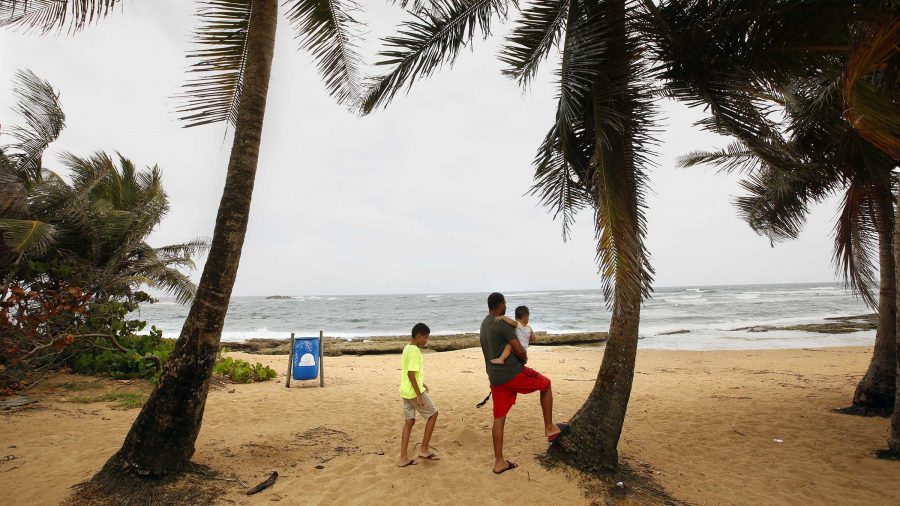 Residents of San Juan, Puerto Rico are anticipating a direct hit from Hurricane Maria, on Tuesday, Sept. 19, 2017. The hurricane is expected to pass over the island on Wednesday. (Carolyn Cole/Los Angeles Times/TNS)

Writers put their passion to use by raising money for those in need with “Iowa Writers for Hurricane Relief,” a reading in which all the proceeds went to the Red Cross. It will use the funds to provide relief to the victims of Hurricanes Harvey, Irene, and Maria.

The event was a collaborative effort involving many organizations, including the Iowa Writers’ Workshop, the International Writing Program, and Prairie Lights Books. Sixteen faculty members, students, and local writers read both original pieces and other authors’ works, ranging from poems to children’s books.

Brandon Taylor, an associate editor of Electric Literature and a student in the Writers’ Workshop, read an excerpt from his novel in progress, Real Life, that focused on a memory from his childhood about a storm.

The pieces the writers chose hit on many different issues and themes, especially storms and political turmoil. Writers Michelle Edwards and Sara Prineas collaborated on the reading and acting out of a children’s story about a girl and her mother heading to the Washington Women’s March, complete with hats and signs.

Poet Elizabeth Willis read a piece she wrote for a Hurricane Sandy benefit and also spoke about calling senators to push relief for hurricane victims in Puerto Rico. Some authors also spoke out against President Trump and his response to Puerto Rico.

The Red Cross estimated that the cost of providing the necessary relief would be around $1 billion because there is so much damage to the Gulf Coast and on the island. That money goes toward getting volunteers to the areas where they’re needed, buying and transporting supplies, and taking care of displaced people.

The Red Cross tries to save money where it can, including buying locally to cut down on transport costs, which also stimulates the local economy, the representative said.

By intermission, ticket sales had reached $3,310, not counting the donation bin outside of the theater. That money was later counted and totaled at $1,600, and UI Visiting Professor D.A. Powell said organizers wanted to get up to $6,000 by the end of the night, lowering their original goal of $10,000.

Powell hosted the event along with Jan Weissmiller, a co-owner of Prairie Lights. They introduced readers and spoke about how successful the event turned out to be.