Amidst many changes on the team heading into the 2017 season, the linebacker group has remained the same. 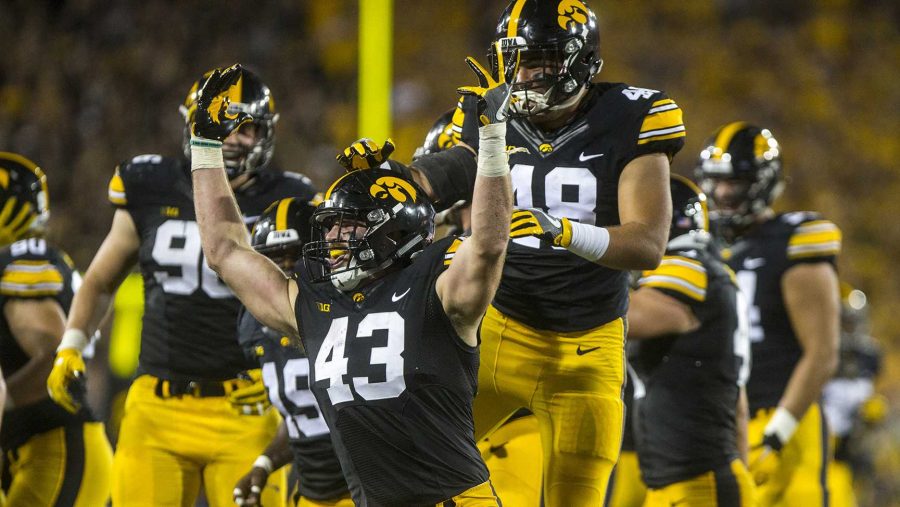 Iowa line backer Josey Jewell celebrates an interception during the game between Iowa and Penn State at Kinnick Stadium on Saturday, Sept. 23, 2017. Both teams are going into the game undefeated with records of 3-0. The Nittany Lions defeated the Hawkeyes 21-19. (Ben Smith/The Daily Iowan)

The Iowa football team has seen its fair share of changes over the past few months.

There was the transition of Brian Ferentz into taking over the offensive-coordinator position, the loss of a large group of experienced seniors, modifications to the lineup because of season-ending injuries, and the adjustment of having a true sophomore take over as the starting quarterback, just to name a few.

But one thing has remained the same: the Hawkeyes’ experienced and talent-packed group of linebackers in Josey Jewell, Ben Niemann, and Bo Bower.

The three of them have been together for a long time — Niemann joined as a true freshman in 2014, and Jewell and Bower arrived in 2013. Both redshirted, Jewell as a recruited player and Bower as a walk-on.

In their fourth season together, the three have developed a particular bond that has helped them form a cohesive unit behind the defensive line. They have a chemistry that has allowed them to be successful group that terrorizes offenses and leads the rest of the younger players to be better.

When looking for players to lead by example on the defensive side, Iowa head coach Kirk Ferentz does not hesitate to look to 41, 43, and 44.

“All three of those guys have a lot of starting experience,” Ferentz said toward the end of the 2016 season. “Those guys, again, you’ll use as an example down the road just about the proper attitude … We have three guys that we have a lot of confidence in.”

Each of the three came to Iowa looking like an average player.
RELATED: Bower back to business
Jewell was recruited in the knick of time, and nearly went to Luther in his hometown of Decorah, Iowa. Niemann was a three-star recruit from Sycamore, Illinois, whose other offers were from Northern Illinois, Illinois State, and Eastern Michigan. Bower committed to Northern Illinois, where he was offered a scholarship, but instead decided to walk on at Iowa.

In 2014, the group’s first year seeing game time, Bower was the star of the trio. After earning a scholarship, Bower started all 13 games that season at outside linebacker.

Niemann also played in all 13 games — but not a lot. He recorded only 7 tackles that season but did add a blocked punt and return for a touchdown.

Jewell missed the first couple of games in 2014 because of an injury, but he worked his way into the starting lineup for the last four games of the season by posting 51 tackles.

The next season, 2015, both Jewell and Niemann ascended into starting spots — Jewell at middle linebacker and Niemann replacing Bower at outside linebacker. With Cole Fisher moving into the weak-side position, Bower was out of a job.

While Jewell and Niemann combined for 171 tackles, 14 for a loss, 5.5 sacks, 12 passes defended, and a return for a touchdown, Bower was on the sideline for most of the game.

He did not get discouraged — at least it didn’t seem that way to the coaches. Ferentz said his positive attitude did not waver in practice, and he continued to work at the position to get back on the field with Jewell and Niemann.

“I think one of the good stories in that group is Bo Bower. You talk about guys that have good attitudes. Bo is a starter and then not a starter,” Ferentz said. “I never saw Bo look discouraged. I’m sure he was. I’m sure there are times he wasn’t feeling great about the situation, but he never showed it. He just kept working hard.

“He’s one of those guys, again, you’ll use as an example … He could have been discouraged, pouted, all that kind of stuff, and he probably did it, but he did it on his own time, not ours.”

Come 2016 fall camp, Bower proved himself to be worthy of the weak-side position, and since then, he, Jewell, and Niemann have started every game together.

Now, 17 games later, the three have molded into a cohesive group that knows what the next guy is going to do before he does it.

“We’ve gotten to know each other better every year, which allows us to communicate a bit easier. We kind of know where we’re at with each other. We just understand it,” Jewell said. “With all three of us linebackers, since we’ve been together for a pretty long time now, just kind of understanding that we know where each other are and where we can actually do things and where we can’t do things.”

It has worked so far this season.

The three seniors have combined for 94 tackles — 8.5 for a loss — throughout the first four games.

Niemann said Jewell really pushes the group to be as good as it is.

“He’s one of the top linebackers in the country,” Niemann said. “Just getting to compete against him every day and try to play to the standard that he has, that’s definitely good.”
RELATED: A rough cut Jewell
While Jewell and Bower are typically positioned in the box, Niemann often plays more upfield. Ferentz has joked that sometimes he looks more like a defensive back than a linebacker.

Because the three don’t usually play very close to each other, communication is of the utmost importance.

Bower said that it helps the three are close friends, because they are more open and have less difficulty communicating.

“We just work off each other. We watch film intensely together, and we just know when someone is going to do one thing, we have to do another thing. It’s just chemistry and molding,” Bower said. “It’s knowing that when we say something, are communicating something, we know what’s going on and knowing where he’s going to be.”

Other than just being on the field with one another, perhaps the most important way the three have been shaped is through film study.

Ferentz said Jewell, Bower, and Niemann watch film studiously and often, building off each other and pointing out things the others may not see.

Jewell is especially good at this.

Through working a variety of people — high-school coaches, former Hawkeyes James Morris, Anthony Hitchens, Christian Kirksey, Travis Perry, Cole Fisher, as well as Iowa coaches Jim Reid and Seth Wallace — Jewell has evolved into a useful tool in the film room whose skills have rubbed off on his fellow linebackers.

“There’s been a bunch of different guys with a bunch of different things they want you to look at, and you try to bring those all in and use them to your advantage,” Jewell said. “All three of us linebackers, and some of the other guys, too, can see it pretty good, I think. Our coaches in the past have taught us how to watch tape.”

After spending so much time together over the past three and a half years, it seems inevitable that the Jewell, Bower, and Niemann would form the bond and the chemistry they have now, as seniors.

It’s obvious on the field, but it doesn’t go unnoticed off the field, either.