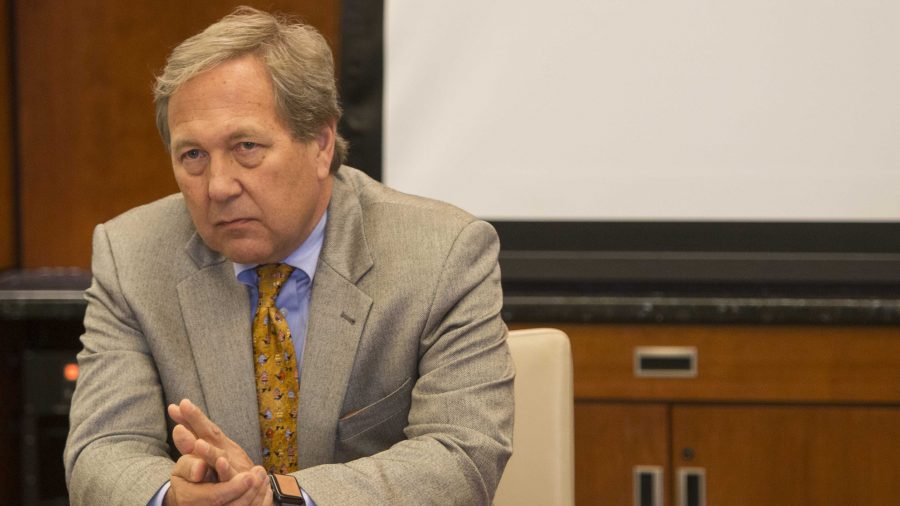 University of Iowa President Bruce Harreld waits to begin a presentation during a Faculty Council meeting in the Old Capitol Town Center on Tuesday, April 11, 2017. Harreld's presentation was given during a closed-door executive session. (The Daily Iowan/Joseph Cress)

The legality of the state Board of Regents’ meetings with University of Iowa President Bruce Harreld prior to his hiring remains in question with trial dates set for two court cases involving the matter.

After new developments in the cases — most recently the release of the regents’ depositions in a case filed by former UI administrator Gerhild Krapf — Harreld told a UI faculty member via email the matter is “old news.”

UI communications Professor Kembrew McLeod emailed Harreld a link to an article published by the Associated Press after news broke Monday revealing the content of the regents’ depositions. The article recounted the depositions in which the regents acknowledged their efforts to circumvent Iowa’s Open Meetings Law.

Harreld replied to McLeod with the two-word response — “old news” — to which McLeod responded, “Old news, perhaps, but still disappointing and demoralizing.”

McLeod told The Daily Iowan he reached out to Harreld because he was interested in his response to the matter, but he found Harreld’s response “smug and condescending.” Rather than dismissing the report as old news, McLeod said, he would like to see Harreld make a serious effort to address the issue.

“One small thing that I would like Bruce Harreld to do is take more seriously the importance of open [meetings] laws,” McLeod said. “His response, ‘old news,’ is a very flippant response for illegal behavior on the part of the regents. They intentionally circumvented the open [meetings] laws to privately recruit Bruce Harreld, and they kept it a secret as long as they could.”

Harreld told The Daily Iowan in an email that he has been open about the meetings taking place.

“I have been very open about the fact that I requested meetings with a variety of people to learn more about the position and the challenges facing the university,” he said. “I am now focused on moving the institution forward.”

Harreld did not answer the DI’s question regarding whether he was aware when seeking more information on the position and requesting the meetings that the meetings might later be called into question as a potential violation of the law.

Harreld also did not say whether the meetings gave him an impression that he had landed the job or motivated him to apply after being on the fence about wanting the position.

However, Harreld told The Gazette in November 2015 he never felt he was receiving preferential treatment and was unsure until the day the regents appointed him that he even wanted the job.

“… There is an assumption that I somehow was given preferential treatment,” he told The Gazette. “I didn’t see that at all. At all. I’m still trying to get enough information.”

Although McLeod said he was concerned about the transparency Harreld has shown and his engagement with faculty, Tom Vaughn, the 2016-17 Faculty Senate president, said in an email to the DI that he believes he had a good working relationship with Harreld while he served in the position.

“I think he has a strong commitment to shared governance and is very supportive of the faculty,” Vaughn said. “He is also very committed to student success.”

Current Faculty Senate President Pete Snyder did not respond to requests for comment by the time of publication.

In his first interview with the DI in November 2015, Harreld said he felt the questions faculty asked, mainly concerning why he is at the UI, were legitimate, and he said he would handle those concerns by reaching out.

“They love this institution, and that may be a piece of this that’s important, that they love it,” he said in 2015. “And therefore they’re appropriate to be concerned about where I’m coming from, that’s fine, I take that. It’s when they start making up stuff that really isn’t true, that’s not productive.”