The UI held a farewell reception for Jean Robillard celebrating a long career in the health field. 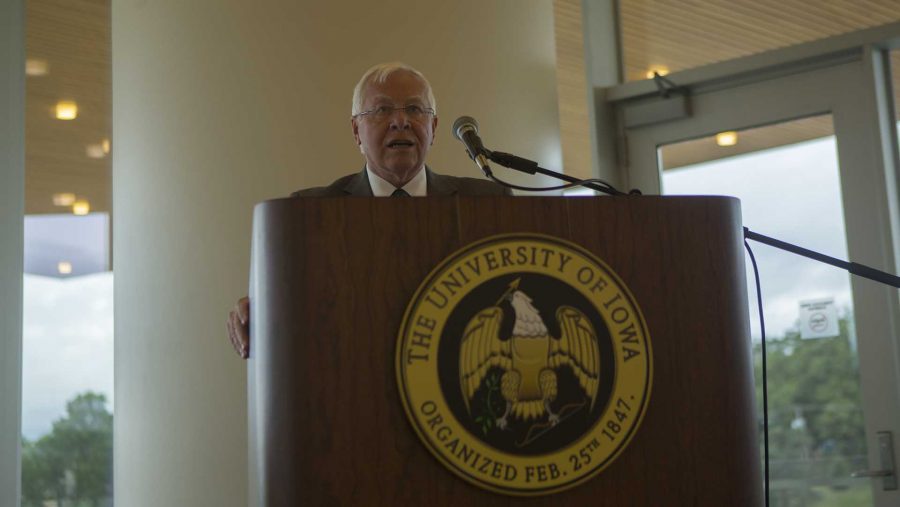 UI Dean of the Carver College of Medicine and VP of Medical Affairs Jean Robillard speaks at a reception honoring his stepping down from leadership positions with UI Health Care at Hancher Auditorium on Tuesday, Sept. 26, 2017. Robillard will remain on the faculty of the Stead Family Department of Pediatrics as a pediatric nephrologist. (Lily Smith/The Daily Iowan)

University of Iowa Vice President Jean Robillard was honored for his work during a farewell reception Tuesday evening at Hancher Auditorium.

Robillard also served as interim president of the UI before current President Bruce Harreld was hired in 2015.

Robillard may step down from overseeing UI Health Care, but he is not retiring entirely — he will remain a faculty member of the Stead Family Department of Pediatrics.

Harreld opened the evening with remarks about Robillard’s impact on the UI.

“Over the last decade under Jean Robillard’s leadership, we’re now in a much different place,” Harreld said during his opening remarks. “And it’s a place that a lot of institutions like ours around the rest of the country are aspiring to. Very seldom in my career can you pinpoint an era and an individual leading that era who have done such a remarkable job.”

Lynette Marshall, the president and CEO of the UI Center for Advancement, spoke about Robillard’s and wife Renée Robillard’s philanthropy, noting that more than $1 billion has been raised in support of health care during Robillard’s tenure.

“We have had unprecedented growth, not only for the Roy J. and Lucille A. Carver College of Medicine but also for the University of Iowa Hospitals and Clinics,” Marshall said during her remarks. “It’s thanks to Dr. Robillard’s vision for the compassionate health care and world-class research that we have here.”

Marshall said that the Iowa Neuroscience Institute, funded by the Roy J. Carver Trust, the Pappajohn Biomedical Institute, and the Stead Family Children’s Hospital are all a result of Robillard’s vision and the team he put together.

“He’s helped show people that Iowa is the place that you come for advanced medicine that compassionate and personalized,” Marshall said.

During the reception, Robillard was presented with a gift of a collection of letters, photographs, and thank-you notes from his time in the position.

Robillard said he was grateful to serve the UI for many years and that many of the remarks made during the reception should be addressed to all who worked as a team to achieve what has been achieved during his time at the university.

“It’s not just one person, it’s a team, it’s a community that is able really to achieve what we have seen with this university over the last 15 years,” Robillard said.

The reception ended with Hancher Executive Director Chuck Swanson speaking about the support Hancher has received from the Robillards.

“I’ve always been impressed and inspired by their heartfelt way that they approach projects of all kinds,” Swanson said. “They care about this campus, this community, this state, and our future.”

The reception closed with a short acoustic performance by Iranian-Canadian musical duo Niyaz.