Hensley: A win is a win

Iowa football got the victory against North Texas, but the Hawkeyes need to fine tune their offense before Penn State comes to Iowa City. 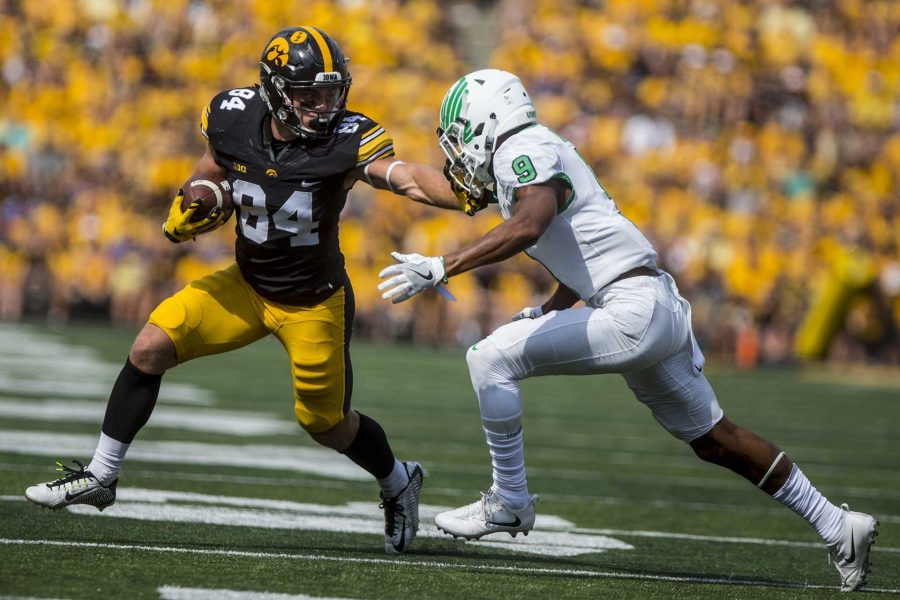 Somewhere in the midst of the 19 penalties and four replay reviews there was a football game.

Who would have guessed?

The game had a weird flow — if there even was a flow — and no team could really put together consistent rhythm.

Head coach Kirk Ferentz said after the game that all the reviews killed momentum, and he’s right.

But you can’t blame replays for not completing drives, and Ferentz knows that, too.

In the first half, Iowa had two would-be touchdowns called back, one via review and the other on a flag.

In both instances, the calls were correct, although fans — and I — would argue that the unsportsmanlike-conduct penalty on Akrum Wadley for high-stepping the final 5 yards of his touchdown was ticky-tack.

Let’s be real. Wadley was having fun. He’s high-stepped before and gotten away with it (please, NCAA, don’t become the new No Fun League). There’s not much consistency with penalties like that.

Iowa had two other chances to score before halftime on deep passes, but the long ball remains ever-so elusive.

Nate Stanley had Matt VandeBerg and Noah Fant open but just did not have the touch on his deep ball — both passes sailed just outside the reach of his intended targets.

Stanley has a great arm, there’s no arguing his power. But the touch isn’t there (yet).

That’s something that will come with more practice. The thing is, however, Iowa doesn’t have a ton of time before arguably its toughest opponent of the season travels to Kinnick.

With a prime-time matchup with Penn State slated Saturday, Iowa can’t play as it did against North Texas and expect to walk away with a win against the Nittany Lions.

Falling into a 14-10 deficit at halftime against North Texas isn’t ideal, but battling back to score 21 unanswered points and shut out a Mean Green unit averaging 45.65 points per game is.

This Hawkeye football team displayed resiliency for the third time in as many games. In each game, Iowa trailed early but did what it needed to do to win.

That’s what good football programs do.

I’m not sure exactly what to expect when Penn State and Iowa clash. I don’t foresee a contest similar to last season’s 41-14 beatdown.

However, if the Hawkeyes don’t capitalize on scoring opportunities, it will come back to haunt them, and it could very well resemble the Happy Valley nightmare engrained in Hawkeye fans’ minds.

Penn State is no North Texas. The Nittany Lions have one of the best offenses in the country, led by running back Saquon Barkley — the best running back in the nation (throw in quarterback Trace McSorley in the mix for good measure, too).

Iowa needs its best offensive performance of the season to keep up with Penn State’s fine-tuned offensive machine.

Yes, a win is a win. Hawkeye football is 3-0, finishing its nonconference slate without a single blemish.

But there are bigger fish — or Lions — to fry, and Iowa knows that.