Volleyball finishes up the non-conference season in the nation’s capital. 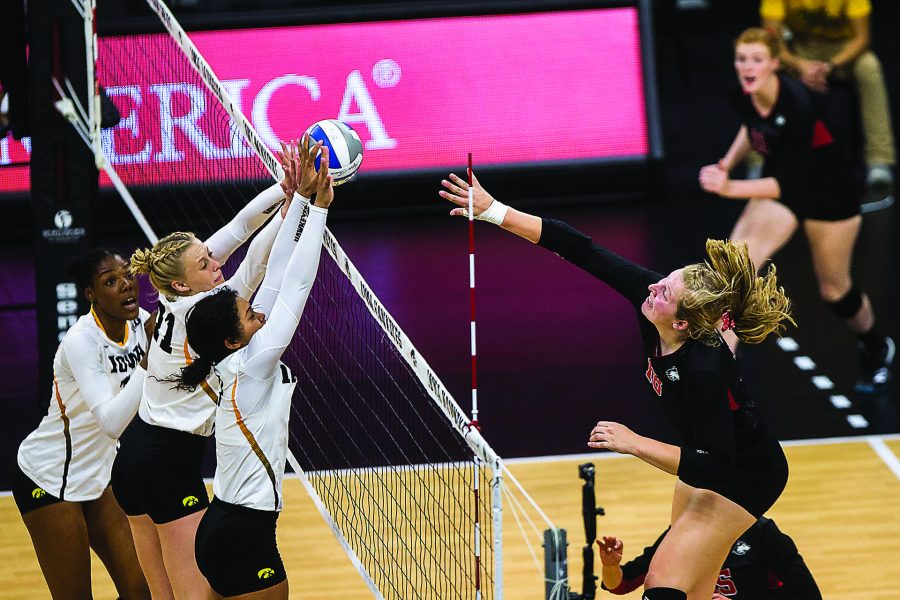 Iowa's Taylor Louis, Kelsey O'Neill, and Brie Orr block a spike during the match between Iowa and Northern Illinois inside Carver-Hawkeye Arena on Friday, Sept. 8, 2017. The Hawkeyes went on to defeat the Huskies 3-0. (Ben Smith/The Daily Iowan)

The Hawkeye volleyball team is in Washington, D.C., this weekend to play in the American Volleyball Classic.

The way the schedule is set up, Iowa will play a lot of volleyball in a short amount of time.

“We have our work cut out for us,” head coach Bond Shymansky said. “Really, we have three matches in the span of fewer than 24 hours, so we play Friday night, Saturday morning, and Saturday afternoon. So it’s just going to be jammed in there. We are going to need a lot of contribution from a lot of different players on our team.”

This type of tournament schedule allows for more playing time from the bench, helping the coaching staff to solidify a starting lineup.

With the Hawkeyes going into Big Ten play next week, Shymansky will focus on th starting rotation this weekend.

However, that’s not to say it will stay the same throughout the conference season.

“The first three weeks have gone by so fast that I don’t think we still yet have all the answers,” Shymansky said. “A lineup is constantly going to change, and players are going to keep growing, and learning, and training situations, so we just have to give them those opportunities, and they have to take advantage of them when they arise.”

All three teams that Iowa is set to face in the tournament took home their conference championships last season, and they are predicted to repeat.

The team’s first match is at 6 p.m. today, when they take on Howard.

Howard is 2-8 this season after dropping its last match in five sets; it already has more losses than it had all last season (26-6).

On Sept. 16 at 9 a.m., Iowa will take on American, which is 5-5. The Eagles recently were swept by Coastal Carolina, which the Hawkeyes swept and then beat in five sets during the Hawkeye Classic on Sept 2.

Finally, Iowa wraps up its whirlwind schedule with a match against Princeton at 4 p.m. Saturday.

Princeton is 6-1 so far this season, losing only to North Texas in a four-set match.

“I think [I’m] just looking forward to playing new teams,” senior libero Annika Olsen said. “I think that all three of the teams we’re playing, they had good records last year, so that’ll help our RPI if we can get the wins. So just getting the chance to show our stuff again and prove how good we are right now.”

Iowa is coming off a two-weekend stint in Carver-Hawkeye in which it went 6-1 with the loss coming from No.22 Iowa State.

Having a good record at home builds up confidence on the road, but playing on someone else’s home court won’t faze the Hawkeyes.

“I think just everyone feels more comfortable at home, so our home record just makes us feel comfortable with that,” freshman setter Brie Orr said. “Going away, I mean we’ve had away tournaments already — in California — but I think we’re still going to play our game wherever we go.”