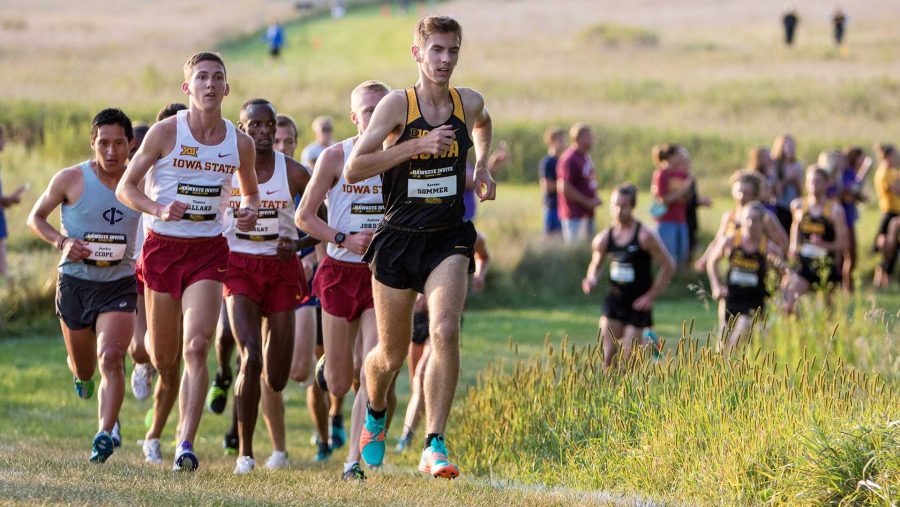 After a weekend off, the Iowa cross-country team will head to Lincoln, Nebraska, for the Woody Greeno Invitational.

The Hawkeyes will be one of 28 teams competing Sept. 16.

Nebraska presents the Hawkeyes with the challenge of competing for the first time on the road in the 2017 season.

Following their first competition, practice intensity grew in preparation for the longer distances in Nebraska.

“We need to keep building our mileage,” he said. “During the off weekends, we do steady-state runs or tempo runs, two very important pieces keeping with our long-runs.”

Hasenbank remains confident in both the men’s and women’s teams in making necessary training adjustments for Woody Greeno.

“One of the things I think the team is stronger at, on both sides, is that they can continue to work the mileage at a higher level throughout the season,” he said.

One of Iowa’s most notable runners, Ian Eklin, has started the fall off on the right foot. At the Hawkeye Invitational, Eklin took ownership of the No. 1 6,000-meter time in program history (18:10.7).

Eklin is confident about the timing of the Nebraska meet when looking at the schedule as a whole.

“I like how we set the meets up,” said the junior from Plymouth, Minnesota. “Each one progresses with intensity.”

Somewhat disappointed with his performance against rival Iowa State during the Hawkeye Invitational, Eklin views the Woody Greeno as another chance to meet his expectations.

One of the top Hawkeyes for the women, Madison Waymire, will head into Nebraska trying to match her success at the Hawkeye Invitational. Waymire entered Iowa women’s top 10 in the 4,000 meters with a time of 14:03.3.

With this accomplishment under her belt, the senior is going into the weekend with the right mindset.

“I’m just going to race and compete for Iowa,” she said. “I want to make sure I’m in the top pack and doing my job.”

Similar to Waymire, teammate Andrea Shine heads to Nebraska after a solid start to the season.

During the Hawkeye Invitational, the junior from Crystal Lake, Illinois, cracked into Iowa’s top 10 for the women’s 4,000 meters (13:58.7), elevating her to seventh in the record book.

Shine heads into this race with clear motivation after a successful, short break from competition.

“Training has been going well,” she said. “This meet is another step to get to the right place and time for regionals.”

Following the Woody Greeno, the Hawkeyes will travel to South Bend, Indiana, for the Notre Dame Invitational on Sept. 29.