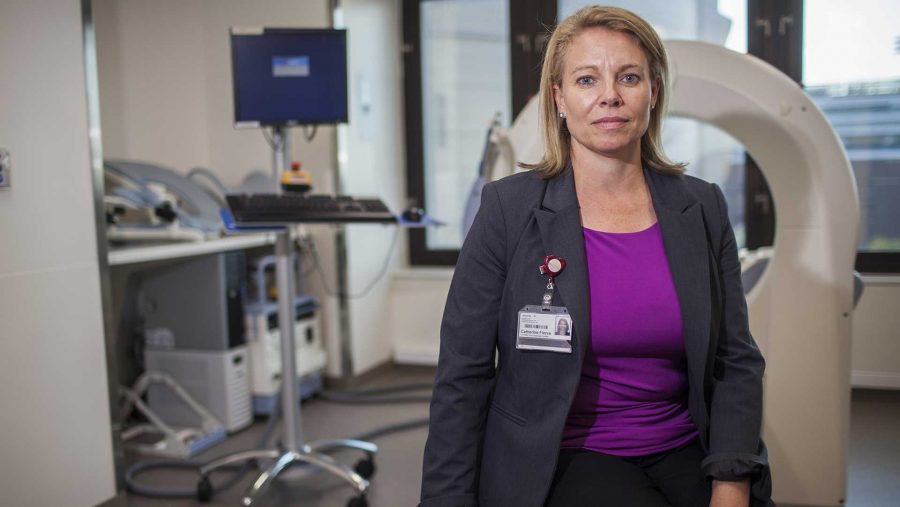 Catherine Pierce, Chief of Operations for the Heart and Vascular Center, sits inside the Nuclear Imaging room during an open house at the University of Iowa Hospitals and Clinics on Wednesday, Sept 13, 2017. The project began in 2012 with a planning period under the direction of Clinical Director, Elizabeth Moore RN. (Ben Smith/The Daily Iowan)

Select clinic staffers were present to show off the facility’s improvements and to offer engaging activities for guests, from tours to demonstrations of new equipment and free blood-pressure checks.

The Heart and Vascular Center has been a decade in the making, the result of planning efforts of architects, clinical directors, and physicians, Clinic Director Phillip Horwitz said.

The open house garnered the attention of locals, and the clinic buzzed with people checking out the new addition to the UI Hospitals & Clinics. The clinic has a sterile, modern look populated with soft colors, and pieces of local Iowan art adorn the walls. A wall dedicated to the project’s donors is displayed in the lobby.

Elizabeth Moore, a UI alumna and associate director of nursing services in the center, led a team of other clinical directors to help plot out the new facility.

“Thousands of meetings and thousands of hours,” Moore said. “But I loved every minute of it.”

One of the key aspects the clinic staff emphasized was creating a better environment and experience for patients. Moore said clinic care can be scary for a patient, so the plan was to make the clinic as homey as possible.

Attention went into every detail, from the color of the floor to the assurance that the public and patients would have access to direct light in the hallways.

Moore said the design of a wooden mural in the lobby was created in part by designers who reached Iowa by plane and decided to design the wall based on the state’s rolling fields of crops.

Comfort and quality of life improvements, however, go beyond wall decorations. With the 30,000 square feet of space, Horwitz believes the experience will contrast from the previous situation.

“We’ve been able to bring in experts from all over,” he said. “Top physicians all in one place. We want patients to have their needs filled in one visit.”

Horwitz said that previously, patients who would come in to the Heart and Vascular Center would have to go to different locations all around the UIHC, and the new clinic solves that problem.

Other touches in the clinic went toward improving patients’ navigation of the facilities, including color-coded patient room sections and separate hallways for the public and staffers.

“We have about double the amount of working space,” she said. “And everything we need is in the exam rooms.”