Laursen: Who does Hall really represent? 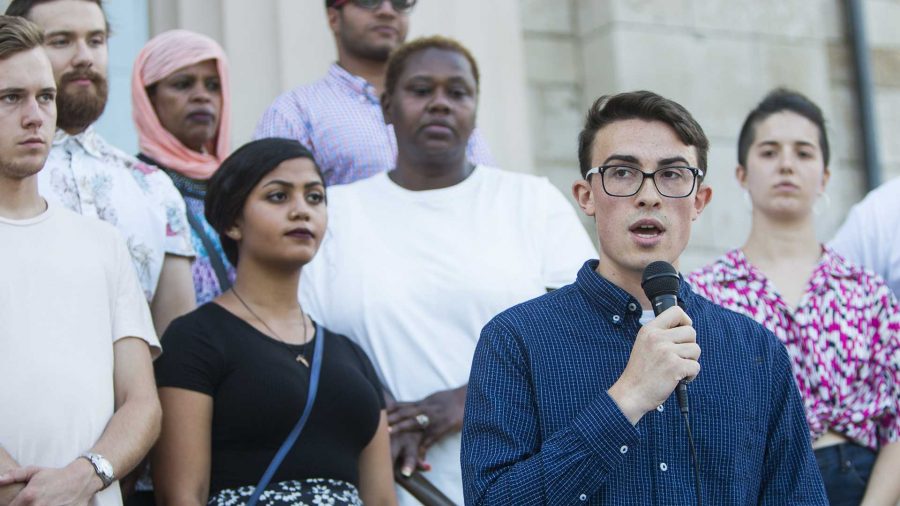 Ryan Hall speaks during his campaign announcement on the east steps of the Old Capitol building on the Pentacrest on Wednesday, Aug. 9, 2017. Hall is a 24 year old student who is campaigning for a seat representing District B on City Council in the upcoming November election. (Joseph Cress/The Daily Iowan)

What voters should know about Ryan Hall’s City Council campaign.

Student involvement in civic duties should be something that is encouraged. In the 2016 presidential election, only 50 percent of people ages 18-29 turned out to vote, according to the Brookings Institute. Voter turnout and civic involvement has historically been lacking, to say the least.

In the upcoming City Council election, candidate Ryan Hall has made student involvement a main piece of his platform. He is running to serve as District B’s councilor. His website states, “I am running to bridge the gap between the student population and the residents outside of campus.”

Although Hall seems to be running on a platform that will encourage student involvement, I question whom he truly represents.

In a City Council election, every resident of Iowa City is permitted to vote for each seat even if they do not reside in a particular district. Essentially, someone who lives in District B can also vote in a District C election and vice versa. This means that every resident,
including students of the University of Iowa, can vote for Hall regardless of whether he is in their district.

Even if Hall does not want to be the “student voice,” I do not think that he possesses the knowledge or ability, at this point, to represent District B on the City Council. Hall moved to Iowa City only last January. Although he has done beautiful work in the community, there is no way Hall or anyone else can accurately understand the needs of a city in nine short months. He is taking ideas from other cities’ experiences and applying them to the Iowa City area.

Hall cannot accurately represent District B well because he does not know it. This is not a personal attack on Hall. Rather, this is a column urging voters to consider if they think any person who has moved to a new city can really understand the needs of that community. I know I do not think that anyone can truly understand how Iowa City works in such a short time. But this vote is obviously not up to only me. I encourage all residents of Iowa City to vote on or before Nov. 7 and have their voices heard.