The University’s Associate Provost for Undergraduate Education and Dean of the University College is appointed to the Iowa Governor’s STEM Advisory Council. 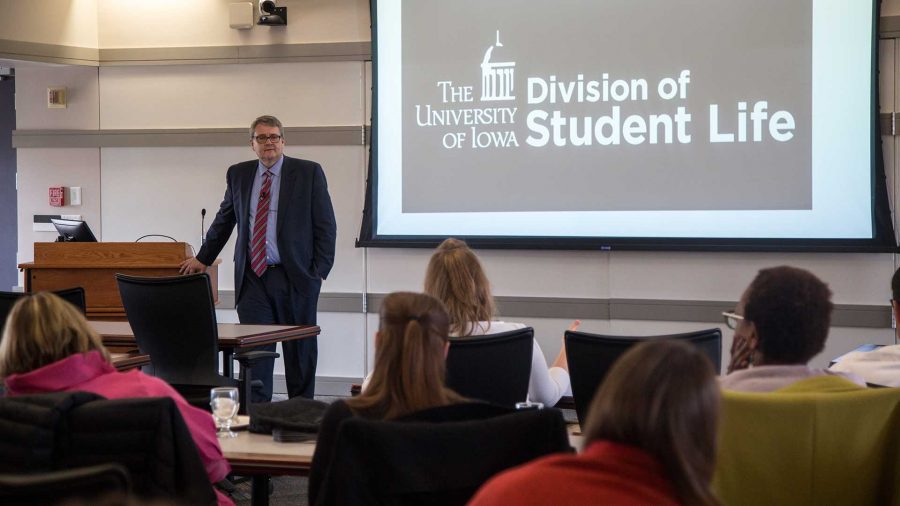 Lon Moeller presents his qualifications and discusses the changes he would make as a the new Vice President of Student Life during the public forum in the Pappajohn Business Building in Iowa City, Iowa on Wednesday, May 3, 2017. (The Daily Iowan/Anthony Vazquez)

On Sept. 1, the University of Iowa’s presence on the Governor’s STEM Advisory Council grew with the appointment of Lon Moeller, an associate provost for undergraduate education and dean of the University College. Moeller is the third UI person on the Council.

The STEM Council is a part of Iowa’s educational ecosystem, made up of 47 educators from all stages of academics and business. It works to give Iowa students from kindergarten to college a better education in STEM-related subjects. Council Executive Director Jeffrey Weld calls it the “business of changing lives.”

The council works to provide after-school programs, internships, and a STEM-related curriculum that, he said, gives students an edge with future employers.

“We want to establish a direct line of communication between K-12 students and secondary education and the workforce,” Weld said.

He believes that Moeller will play a critical role in this vision.

“It’s pivotal,” Weld said. “So much depends on the voices at the secondary level to recognize if initiatives will connect.”

Moeller will join UI president Bruce Harreld and environmental program director Beth Hochstedler, a member of the council since 2013. She was named MVP of the month in December 2015.

Hochstedler’s experience in STEM outreach, however, dates before she was named to the council in 2013 — she has nearly three decades of experience in education and recruitment for the UI’s State Hygienic Laboratory.

“I always hear, ‘Wow, you’re from Iowa? They are really one of the leaders in STEM,’ and it’s so great to be a part of that,” Hochstedler said in an interview with iowa.gov. “I recognize that we truly are stepping up in a leadership role for the nation in STEM and the future workforce, and it’s an important mission that I can clearly see from serving on the STEM Council.”

In addition to her work at the Hygienic Lab, Hochstedler also played a leading role in spearheading the charge to bring the national iExploreSTEM festival to Iowa City.

She also helped to create the STEM Road Map with a committee before the STEM Council started up in 2011.

Hochstedler shares Weld’s enthusiasm about Moeller’s appointment to the council.

“It’s a wonderful partnership,” she said, “Very exciting for the university.”

Moeller said he gained the attention of the STEM Council in part for his work overseeing projects at Kirkwood Community College, including STEM programs at the Kirkwood Regional Center. As a voice on the council, he said, he hopes to join the discourse in “comparing notes” and working on improvements to such initiatives las outreach and education.

To Moeller, the UI is an important pipeline for young STEM students with programs such as the College of Engineering’s K-12 Outreach and the Pappajohn Entrepreneurial Center’s Jacobson Institute. With his appointment, the UI’s presence on the council, and in the statewide conversation on STEM, is bolstered.

“The University of Iowa needs to be part of the conversation on issues like STEM education,” Moeller said.