After Tuition Task Force meetings, regents ask: ‘What do we do next?’

The state Board of Regents insists it will use findings from its August Tuition Task Force meetings to establish a predictable tuition plan, but the regents have not yet determined what that will look like in practice. 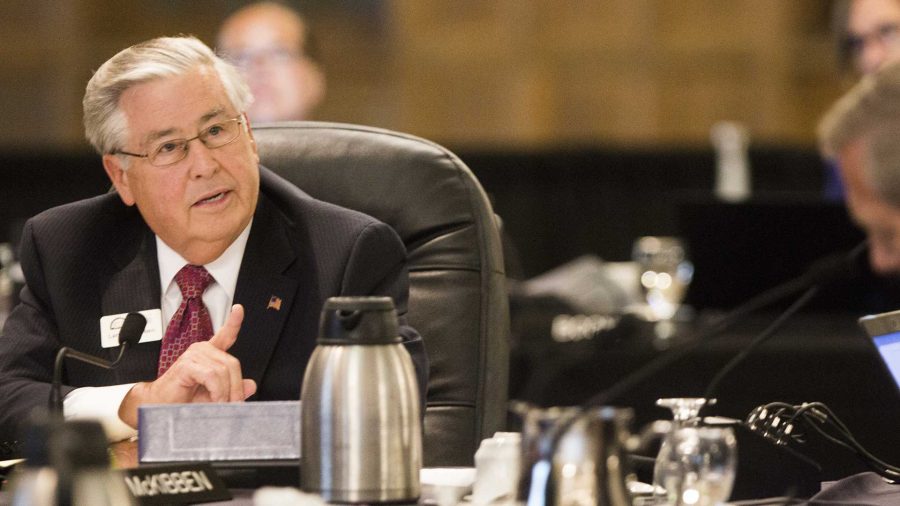 FILE - Regent Larry McKibben speaks during a state Board of Regents meeting in the IMU Main Lounge on Thursday, Sept. 7, 2017. The regents provided a summary of the state's funding situation and discussed future steps they would take to make a predictable tuition plan. (Joseph Cress/The Daily Iowan)

Midyear votes to approve tuition rates at the three universities governed by the state Board of Regents will be a thing of the past, regents say.

Consistent with what The Daily Iowan reported on Sept. 2, Regent Larry McKibben, the chair of the Tuition Task Force that convened on Iowa’s three public-university campuses this summer, said at the regents’ Sept. 7 meeting that the regents have not made any decisions based on the task force’s findings.

McKibben said the different needs of the universities will be factored into the proposed rates, as well as the concerns students expressed — which centered on predictability and affordability of tuition increases, boosting financial-aid offerings, and the long-term value of a degree.

Working with students, institutions, state legislators, and stakeholders outside of academia to create a predictable tuition plan was the central focus of the task force’s work.

“We must be proactive and not reactive,” he said. “Change is necessary and must come for our three great universities in Iowa.”

If the regents, institutions, and state Legislature fail to make this change, UI College of Medicine student Rob Humble said, it may mean the state will lose its young professionals who continue to work in the state after graduation. According to the college’s website, 50 percent of the 5,000 physicians who practice in Iowa received some or all of their medical education at the UI.

“I don’t want to see young students priced out of an education,” he said.

UI President Bruce Harreld said in a Sept. 5 interview with the DI the UI is working to ensure support mechanisms are in place to financially support students who need it, but he does not think the UI is pricing itself out of the market

“You say is it pricing out — well, after five years of 7 percent increases, we will still not be the average of our peer group,” he said. “Think about that — five years of 7 percent a year compounded, we will still be less than the average of our peer group, in terms of tuition. So I understand it’s hard; I understand we don’t like it. But right now, we’re at the rock bottom, and we’re at the rock bottom also in state appropriations.”

As the UI makes a push to bring tuition rates up higher to compete with the peer institutions it benchmarks itself against, UI graduate student Landon Elkind said if the UI continues to raise tuition, he wants to see a line-item list of what that tuition revenue funds.

Harreld said it is too soon to see that detailed of a list for fiscal 2018. However, the UI currently publishes spreadsheets showing which areas of the university its funds are used. Now that the UI has finalized enrollment numbers for the fall of 2017, it will soon take those totals and compare those with projected enrollment totals to form the fiscal 2018 budget.

Finding a sustainable solution to the tuition issue, McKibben said, would involve a better balance of state support, institutional savings, and tuition adjustments. It simply comes down to whether higher education in Iowa is a priority.

“The question remains,” McKibben said, “what do we do next?”