UI takes measures to limit enrollment in Class of 2021

After two years of record-setting class sizes, the UI administration delivered upon its previous calls to limit enrollment. 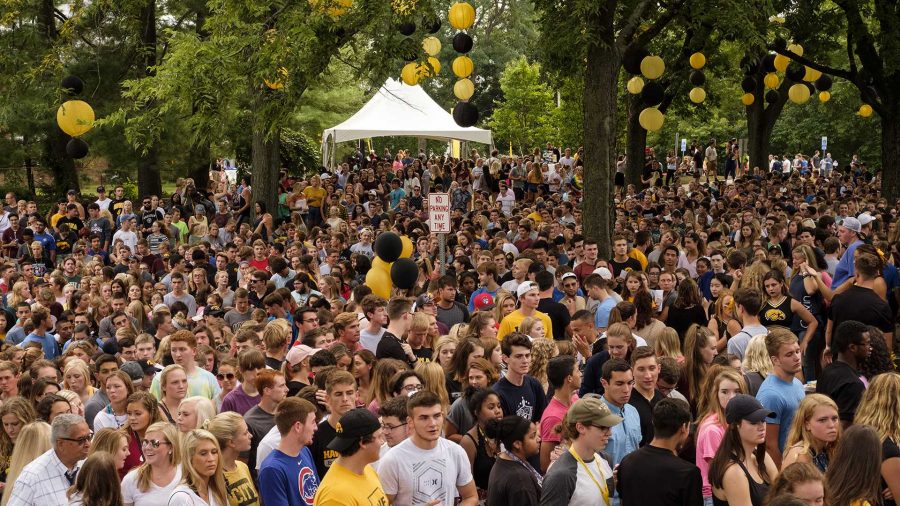 Incoming freshmen wait for food at the President’s Block Paty after convocation on Aug. 20, 2017. This years incoming class was smaller than the previous two years with only 5,029 incoming students. (Nick Rohlman/The Daily Iowan)

The University of Iowa has managed to dial down its enrollment growth, announcing on Thursday the Class of 2021 is its third-largest class in UI history after welcoming record-setting class sizes for two-consecutive years.

UI President Bruce Harreld said during his report to the state Board of Regents in the IMU Main Lounge on Thursday that the UI administration has looked into ways to purposefully reduce the incoming class size — something he said the UI would examine at the September 2016 regents’ meeting.

One way the UI achieved this for the Class of 2021, The Daily Iowan reported in January, was by moving the application deadline from May 1 to March 1. Those who applied after the date were put on a waiting list.

Enrollment rates have been dropping over the past two years with 600 fewer students enrolled in this year’s incoming class than the previous year’s total for the fall semester, 5,029 students.

While the size of the freshman class has decreased since last year, the university has maintained its goal of having the first-generation student population make up at least 20 percent of the class, comprising nearly 23 percent of the Class of 2021 — a 1 percentage point decrease from last year’s incoming class.

UI Vice President for Student Life Melissa Shivers said in an August interview with the DI that as a first-generation herself, it is a community of students she is learning more about, including the barriers — some of which may be financial — getting in the way of their success.

“… My hope is to continue to work closely with Brent Gage in Enrollment Management as they continue to flesh out their scholarship model and recruitment plans for first-generation students …” Shivers said.

Despite the purposeful reduction in enrollment, the UI has seen an 8 percent increase in resident student enrollment, with approximately 58 percent of the Class of 2021 coming from Iowa.

According to the regents’ Tuition Task Force report, 60 percent of undergraduate students at state regent universities are from Iowa. Nonresident students’ tuition being “closer to the ceiling of what the market will bear,” meaning a tuition increase for that population “poses a risk of lost enrollment” if tuition rises too far above peer institutions. Resident students and families are then asked to “shoulder more of the cost of public higher education,” the report said.

Although the universities have seen a reduction in appropriations, the report notes that Iowa is one of 11 states for which the decline in state appropriations has been more than tuition and fee increases; enrollment growth has offset that.

During the budgeting process, the UI reviews projected and actual enrollment counts to make adjustments to the budget and to each college’s tuition revenue to determine how to allocate resources depending on whether enrollment was higher or lower than the projected total.

Jeneane Beck, the UI assistant vice president for External Relations, said in an email she did not know the enrollment projection that would be used to calculate the fiscal 2018 budget and she has no additional information to share about the tuition-allocation methodology.  Intentionally managing enrollment growth would ensure the UI has sufficient resources to positively affect student outcomes, Harreld said on Thursday.

“The size and growth of our student body are not our prime objectives; rather, we are focused on the quality of the outcomes for our students,” he said.