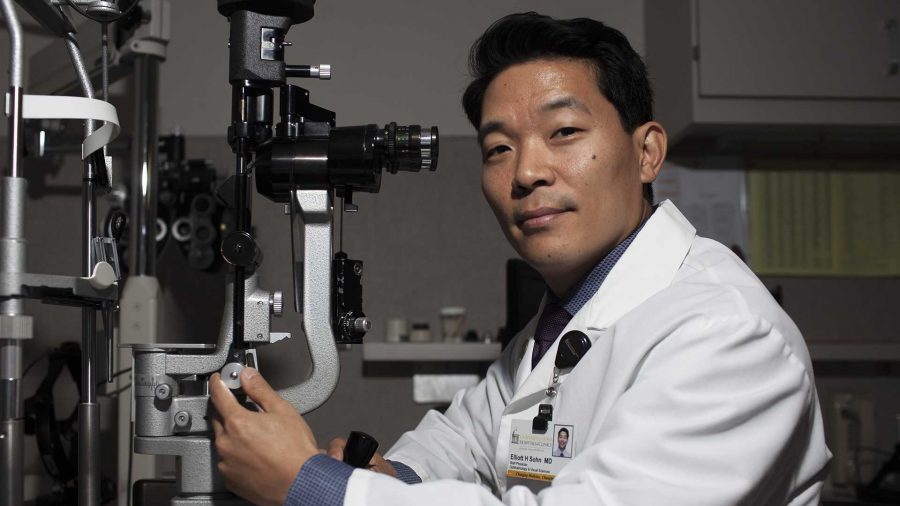 Dr. Elliott Sohn MD poses for a portrait inside a retinal examination room at the Eye Care Clinic in UIHC on Wednesday, Sept. 6, 2017. Dr. Sohn is working on a cure for inherited retinal blindness using gene therapy and STEM cell research. He is also an amateur Forumla Lites driver and will be participating in the SCCA National Championship Runoffs in Indianapolis on Oct. 1. (Ben Smith/The Daily Iowan)

When he’s not seeing patients or researching for a cure for inherited retina diseases, UI ophthalmologist Elliott Sohn can be found on the racetrack.

At first glance, University of Iowa Associate Professor of ophthalmology Elliot Sohn looks like your typical physician — white lab coat, medical journals lining the shelves of his office. But there is more than what meets the eye.

Day to day, he’s an ophthalmologist at the University of Iowa Hospitals and Clinics Eye Care Clinic and a faculty member in the Ophthalmology and Visual Sciences Department. He conducts research at the Wynn Institute for Vision Research.

In his free time, he is an amateur racer in the Sports Car Club of America.

His interest began several years ago, when he was introduced to street racing by a colleague.

“I had a blast, and I started looking for a car to do racing in a way that is a lot more affordable and safer than racing my street car,” Sohn said.

He races for the Sports Car Club of America, one of the biggest amateur racing organizations in the U.S. with more than 65,000 members.

His first race was in April; he has competed in six thus far, and has a few victories to his name, with two second-place finishes and one third.

When he’s not on the track, Sohn conducts research at the Wynn Institute.

“It’s essentially a big team of scientists and clinicians who are all uniting to cure inherited retinal disorders and other inherited eye diseases,” Sohn said.

RELATED: For artist, the eyes have it

At Wynn, Sohn is part of a team that has had a breakthrough in searching for a cure for inherited retinal diseases in which patients have lost the retinal cells that sense light and drive vision.

“What we’re doing is using stem cells made from someone’s skin to create retinal cells that will eventually go back into that same person to restore vision,” Sohn said. “These patients have genetic mutations, so we also have the ability to correct the mutation in the stem-cell phase.”

As for his racing career, Sohn has one more race left this year – the 2017  Runoffs, the auto club’s national championship. For the first time ever, the race will be held at Indianapolis Motor Speedway, with more than 1,000 drivers competing in a three-day span.

Sohn will race on Oct. 1, after spending 10 days prior to the race at the track, practicing, testing, and doing qualifications.

Sohn does not leave work behind on the track — the side of his race car sports the Wynn logo, which generates interest in the institute.

“At the races, people come up to me and ask about the research we’re doing,” he said.

Katie Sturgell, the Wynn associate director of development, raises funds for the institute and works with Sohn.

“In his racing, he’s raising support for Wynn Institute,” Sturgell said. “He combines his skills as a doctor and a passion for race-car driving. The work he’s doing is bringing more people into our area and making them aware of the groundbreaking research happening at Wynn.”

Don Shriver is a patient of Sohn’s who also knows him personally; Sohn has raced several times at Blackhawk Farms,  near Shriver’s home in Illinois. Sohn stays with him during these races.

“He has an attitude as a surgeon that he wants to perform at the highest level he can, and he takes that attitude to racing,” Shriver said.

“Ophthalmology is my main job, and that’s not going to change,” Sohn said. “… It is a perfect crossover of my work life and my fun life.”