The UI Hospitals and Clinics let patients design their own radiation masks to make radiation therapy a little less scary. 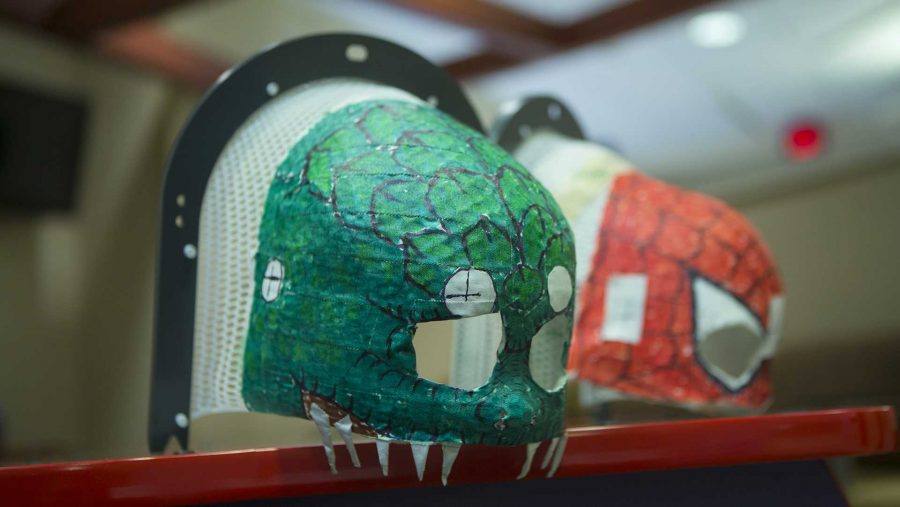 Radiation therapy is no walk in the park, even for adults, but second-grader Calvin Frye knows he is safe when he wears his green Killer Croc radiation-therapy mask.

The radiation mask is a tight-fitting mold used to keep patients still as they undergo radiation therapy. Once the mask is secured, the patient can’t move, a frightening venture for anyone, even if the process is painless.

To make the process a little less intimidating, especially for kids, the University of Iowa Hospitals and Clinics Radiation Department enlisted a volunteer to paint the masks however the patient wants.

Calvin, who has been fighting an aggressive cancerous brain tumor since July, wanted his mask to look like the fiercest character he knows, Batman’s adversary Killer Croc.

“He’s an oversized killing machine, and he wanted him to help kill this tumor,” Bre Frye, Calvin’s mother, said. “It helps him be able to have some control over the situation.”

The mask decoration started when Jana Grienke, a clinic administrator in the Radiation Department, read an article about a similar program at a hospital in Canada.

“It really focused on one particular patient who had his mask as a superhero, and he talked about how he felt like it gave him powers to beat cancer,” said Grienke. “It was a touching article, and I thought, ‘Gosh, that’s so simple.’ So I brought it up in one of my manager meetings.”

From there, Grienke reached out to Weiren Liu, a medical student at Carver College of Medicine and a previous volunteer at the hospital, to see if he was interested in painting masks for the program.

“He was very excited about it from the beginning. He loves making and creating new things.” Grienke said, “One girl wanted an ocean scene; that was cool. One kid wanted John Deere tractors so he made it into a John Deere tractor-like design.”

Liu has completed about 30 to 40 personalized masks since he started about a year ago.

Chief radiation therapist Dolly Chesnut said the masks help kids gain confidence and gives them an opportunity to make the process less intimidating. She said that’s the “magic” to working with kids — giving kids options so they don’t feel like they’re being pushed into doing things.

“The mask is a scary piece,” Chesnut said. “But then we give them a choice. We tell them we have to make this mask, but you get to pick out how it’s decorated.”

Not only are the masks helpful for improving the kids’ experience, it also reduces the amount of anesthesia the therapists and doctors have to use.

“For radiation therapy to occur, they have to be willing to lie still so that we are aiming our treatment beam accurately, and the mask is one of things that helps accomplish that. Our other option is anesthesia,” Chesnut said. “Because radiation doesn’t hurt, the more that we can build their trust and the more we can decrease their anxiety, the less chance of having to use anesthesia.”

For families such as the Fryes, who drive back and forth from Iowa City every day for treatment, the masks are a small way to make their experience a little bit better.