Campus leaders say they remain committed to fostering a safe and inclusive atmosphere in light of Tuesday’s news about President Trump administration\'s intent to end the DACA program. 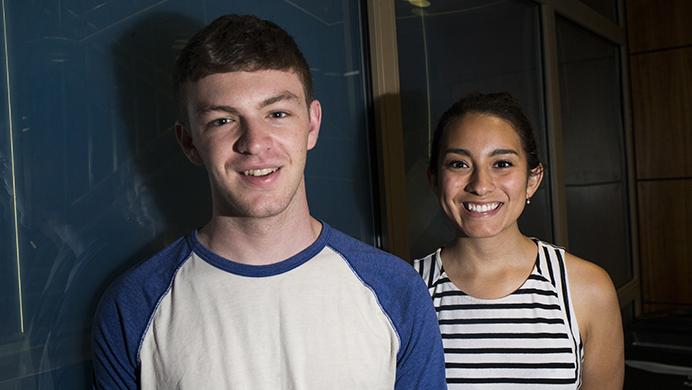 UISG President Jacob Simpson and Vice President Lilián Sanchez pose for a portrait in the UISG offices in the IMU on Tuesday, June 13, 2017. (The Daily Iowan/Joseph Cress)

Members of the University of Iowa community are voicing a commitment to the UI’s values of community, inclusion, and respect after the announcement on Tuesday that President Trump’s administration plans to rescind the Deferred Action for Childhood Arrivals program.

DACA is an executive order established by former President Obama to allow certain undocumented immigrants deferred deportations, work permits, and the opportunity of college educations if they arrived in the U.S. as minors. U.S. Congress has six months to enact a legislative solution to DACA.

UI Student Government President Jacob Simpson and Vice President Lilián Sánchez said in a statement that the termination of DACA will revoke the documentation of almost 800,000 people, many of them students. Without documentation, “the opportunity for these students to pursue their higher education is at risk.”

“We stand in solidarity with students who are impacted by the pending termination of DACA, and we will continue to advocate for the University of Iowa to be a safe and supportive community for all students, regardless of their documentation status,” they said.

Simpson was also one of four shared-governance leaders — including Tejasvi Sharma, the president of Graduate and Professional Student Government, Peter Snyder, the UI Faculty Senate president, and John Laverty, the UI Staff Council president — to sign a statement emailed to the UI community stating the university’s mission is to create a safe and inclusive campus environment.

“As students, staff, and faculty of the University of Iowa, we reaffirm our commitment to ensuring all students have equal opportunity to pursue their education in our community,” the leaders said. “We stand with students impacted by the termination of DACA, and we are dedicated to providing them with our support.”

UI President Bruce Harreld and other administrators did not sign onto the statement. Jeneane Beck, the UI assistant vice president for External Relations, said in an email Harreld has previously shared his position on DACA by signing onto a statement from Pomona College in California.

“Shared governance wanted an opportunity to speak as well so crafted their own message,” she said.

Additionally, she noted, Harreld signed on to a letter on Tuesday with American Association of Universities member university officials urging Congress to act immediately to protect DACA participants.

“We strongly urge congressional action immediately so DACA participants may remain in the United States without fear of deportation and so they can continue to contribute to our society,” the statement said. “… They represent what is best about America, and as scholars and leaders, they are a vital part of our future. Providing a permanent legal solution for these individuals is both a moral imperative and a national necessity if our nation is to live up to the ideals we espouse.”

Beck said the UI admissions process will not be affected by the repeal of DACA. The UI does not ask about citizenship/immigration status during the application process, nor does the UI “maintain information on undocumented students or students with DACA status,” she said. Rather, students are admitted to Iowa’s three public universities governed by the state Board of Regents based on the student’s Regent Admission Index score.

Because the UI does not collect data on who is affected or how many students are affected, Harreld said in an interview with the DI on Tuesday, the university’s work largely involves letting those who might be affected by the DACA repeal know the UI is ready to help.

“… Clearly there are members of our community that could well be impacted by this, and so part of what we’re trying to do is just get out word to anybody who is individually or family or friends may be impacted and let us know, and we have a lot of different support systems here on campus,” he said.