Iowans fight for $15 in Des Moines on Labor Day

Labor Day protesters at the State Capitol called for a $15 an hour minimum wage. 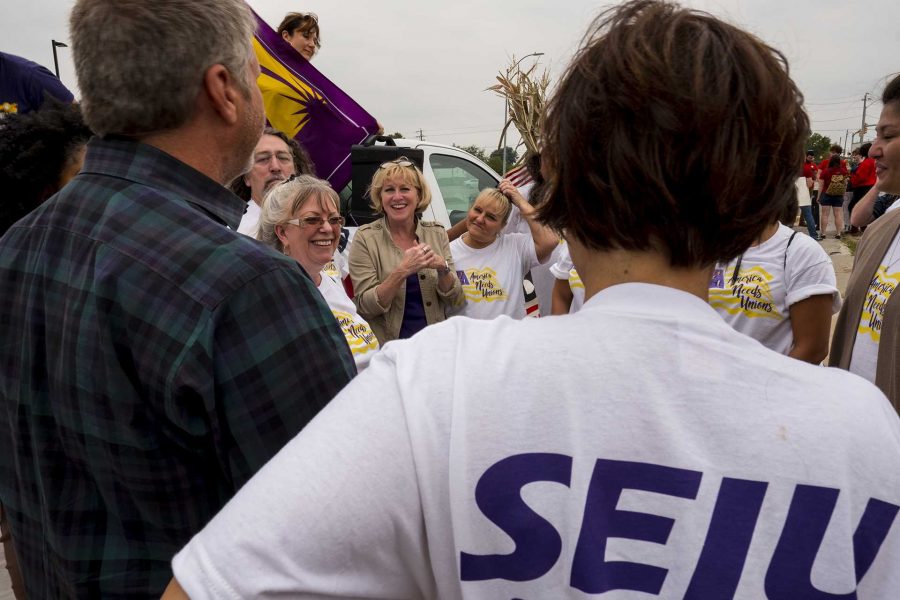 Cathy Glasson meets with members of SEIU during a demonstration at Mercy Hospital in Des Moines on Monday, September 4, 2017. Glasson, the president of SEIU local 199, is running for governor of Iowa as a Democrat. Protestors attended multiple events in Des Moines on Labor Day to demonstrate in support of a $15 per hour minimum wage and private sector unions. (Nick Rohlman/The Daily Iowan)

DES MOINES — More than 100 protesters gathered in front of Mercy Medical Center, 1111 Sixth Ave., on the morning of Sept. 4 to demand the state of Iowa raise its minimum wage to $15 an hour.

Pete D’Alessandro, a Democrat running for the seat in Iowa’s 1st Congressional district, spoke forcefully at the rally for the higher wage.

“The fight for 15 … starts at $15 an hour,” D’Alessandro said. “It’s not what we’re going to get to. It starts at 15, and then after we get to 15, we’re going to make sure everyone in this country has a chance to organize in a proper union.”

Cathy Glasson, one of several candidates running for the Democratic gubernatorial nomination, told The Daily Iowan Labor Day should be about bringing awareness to the state of Iowa that workers are getting the short end of the stick.

“They can’t pay their bills, they [have] two and three jobs to make ends’ meet, they won’t have a secure retirement,” Glasson said. “That’s not a future for Iowa that I believe in and value.”

Those participating in the rally were demanding a $15 an hour minimum wage and the right to unionize.

At the rally, Johnson County Supervisor Mike Carberry said one way to protect the health and welfare of Iowa’s citizens is to raise wages and build strong unions.

Carberry said that is why he worked to raise the minimum wage in Johnson County to $10.10 once he was elected Johnson County supervisor two-and-a-half years ago.

“I ran on that, and we got it done,” Carberry said. “The problem was, after we instituted it, we really pissed a bunch of people off here at the State Capitol, and they took it away.”

Carberry called on those present to vote the GOP out of office.

“What we really need is some bold, progressive Democrats,” he said. “Let’s get people elected at every level, from the dogcatcher to the governor, that support our values … We need to organize every day, not just every two years.”

Carberry said nonpartisan elections for school board and city council are taking place all over the state this year.

“That is our pipeline,” Carberry said.

Nurse Sandy Daren also spoke at the rally, having just finished a 12-hour shift at work.

“Iowa workers’ compensation comes in at 50th in this country. It comes in dead last,” Daren said. “However, our cost of living is not 50th.”

In many states, Daren said health care is the step into the middle class for families, but not in Iowa.

“Here we have to work multiple jobs with dangerously low staffing — dangerous to our jobs and to ourselves,” she said. “That’s why hospital workers from all over Iowa, from across the Midwest, are joining together to fight for the $15 an hour minimum wage for all hospital workers and a union for all.”

“We’ve got to go back to our roots and get back to the mobilizing and organizing that we know works to bring power to working people that are suffering so much in our state,” Glasson said.
Click below for more photos
[masterslider id=”53″]