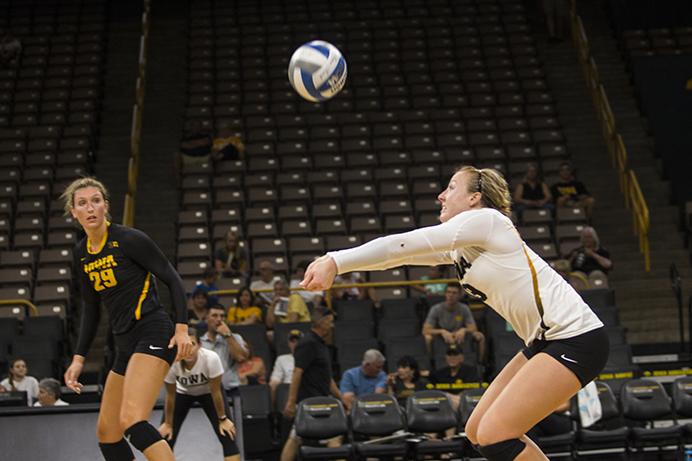 Iowa's Annika Olsen sets a ball during the volleyball Black & Gold scrimmage in Carver-Hawkeye Arena on Saturday, Aug. 19, 2017. The Hawkeyes will host their first home game against Nebraska-Omaha at noon on September 1 to kick off the four game Hawkeye Classic. (Joseph Cress/The Daily Iowan)

The Iowa volleyball team will finally make its début in Carver-Hawkeye this season in the Hawkeye Classic after opening up on the road.

The Hawkeyes emerged from the Long Beach State Invitational in California with a 2-1 record, the only loss coming at the hands of No. 2 Stanford.

The players are excited about coming home.

“I think just playing on our home court is going to be a huge advantage for us,” senior defensive specialist Annika Olsen said. “We’re really used to it; we love playing in Carver. We have great fans, great support, just getting used to that comfort, we’re excited about that.”

With the Hawkeyes playing two matches each day, it gives them the opportunity to play a lot of competitive volleyball in a short amount of time.

“There’s tons of opportunity to play a lot of different players and see different looks as we keep working to find — or really feel — what we feel like is the best lineup with our group,” head coach Bond Shymansky said.

Smith expressed only joy to play her former team, saying that they parted ways on a good note, and she is excited to see her teammates and coaches again.

Omaha comes into the weekend 0-3 opening the season, getting swept at the Cyclone Invitational in Ames.

Shymansky is more focused on Omaha’s setter than their hitters, however.

“Omaha has really improved a lot,” Shymansky said. “Love their setter a lot, really great competitor, great hands, and she’ll provide a big challenge for us.”

At both 7 p.m. today and 2 p.m. Saturday, the Hawkeyes will face off against Coastal Carolina, which might be their best competition of the tournament.

Coming off of last season, Coastal Carolina is expected to defend its Sun Belt championship.

The Chanticleers are 1-1 after the TCU Cowtown Classic this past weekend.

The Hawkeyes have topped the Chanticleers each of the four times they have met, the last match coming in 2015.

Iowa will finish out its weekend against Indiana State on Saturday at 7 p.m.

The Sycamores are 1-2 on the season following the Indiana Invitational, where they beat DePaul, 3-0, but were swept by both Ball State and Indiana.

“Indiana State is certainly on the rise with their coaching staff; they’re doing a good job,” Shymansky said.

Hawkeye senior middle blocker Kelsey O’Neill thinks that this will be when the players gauge how far they’ve come since last weekend.