Sanders: Break out of comfort zone 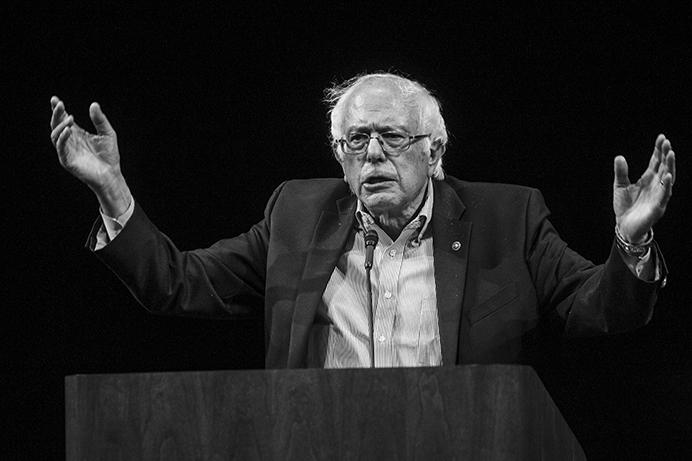 For Sen. Bernie Sanders, I-Vt., his political revolution was never about whether the people of Iowa, or the United States, were prepared to accept ideas what he said some might call outside-of-the-box ideas, but about Americans realizing that if they stood together against what he called the greed of the billionaire class, great things could be accomplished.

Sanders spoke at Hancher Auditorium on Thursday night to discuss his book Bernie Sanders’ Guide to Political Revolution, in an event presented by Prairie Lights.

Among the crowd were Stacy Bevard, 32, and Stephany Cochran, 34, two sisters from North Liberty.

To bring Sanders’s political revolution to Iowa, the sisters said younger people needed to submerse themselves into the political cycle.

“The grass roots, it has to start at the bottom in order to work its way up,” Bevard said. “Getting out there and, you know, organizing something if there isn’t something already organized, but just participating and making yourself heard.”

She hopes, despite its Republican-leaning population, that Iowa can see its own political revolution. Cochran agreed.

“I mean just seeing the kids, kids who can’t vote are in there [the venue] right now, they might be old enough to vote in the next one,” Cochran said.

She said the younger generations will have the building blocks they need to make that choice to partake in democracy.

“I feel like even with the next election coming up there’s going to be a lot more people hitting the pavement, a lot more people going to the booths, because people are going to realize that, well, some of these small groups of people have turned into bigger groups of people, and we’re safer in numbers,” she said. “I would love to see it by next election, but I don’t know if that’s moving too quickly for a political agenda to make that change.”

For Alan James, 82, and wife Molly, 83, from St. Paul, Minnesota, a political revolution in Iowa could mean a more reliable future for their Iowa-grown grandchildren.

“I think where we fail most in our democratic process is we do not listen to the people — we’re peripheral to the system or a process, and the intelligence of the populist needs to be harvested, and it’s not at all,” he said.

Iowa politicians need a new kind of focus, Alan James said, and what he called self-confidence.

“I think if you listen to the people, there’s a great body of intelligence, compassion, wisdom, and maturity — we ape for heroes, and heroes with any persuasion simply want to exploit us — we cannot have a hero mentality and be a democracy,” he said. “Mendacity is the genesis of all evil, and our politics on both sides, all across the board is infused with mendacity.”

Molly James said a statewide political revolution could be possible if thoughts were put to action.

“Just thinking is important,” she said. “But meeting with people — not just marching and carrying signs.”