As anti-labor sentiments sweep across the country, we must remember why we celebrate Labor Day. 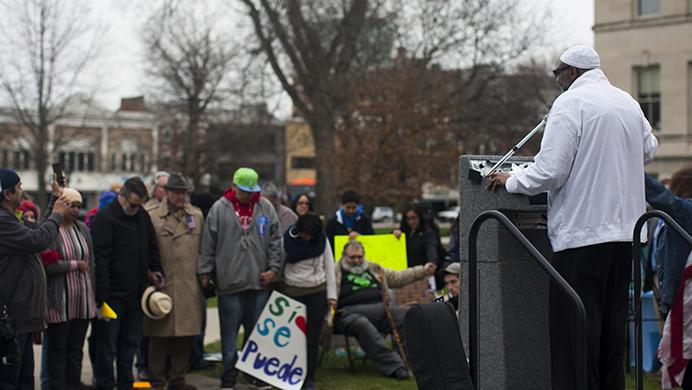 A speaker begins with a prayer at the LULAC worker's rally in front of the Old Capitol on March 30, 2017. The organization LULAC has about 16 different councils and 500 members in the state of Iowa. (The Daily Iowan/Kenny Sim)

As a tide of anti-labor reaction sweeps across the country — most recently in Iowa — it bears remembering what it has meant to have a strong and vital labor movement. We’ve witnessed a succession of Republican presidents, from Nixon and Reagan through Bush and Trump, appropriate and distort the significance of the labor’s day and labor’s history. Its origins lie in the 19th century surge of new labor organizing. It was born of labor’s own collective efforts to win a better life and respect and control over the terms under which workers sold their labor. It represented a claim on the wealth they created. That claim and those rights have been contested by employers and their allied politicians every step of the way.

We can look back to three lessons labor has taught us. The first is the value of solidarity. In the closing decades of the 19th century, an organization that most Americans have never heard of called The Noble and Holy Order of the Knights of Labor organized 1 million workers in local assemblies of “one big union” that embraced workers regardless of skill, ethnicity, gender, or race. Their mantra was “an injury to one is the concern of all,” and they organized across the length and breadth of the country. Iowa workers alone built hundreds of local assemblies that included coal miners, button workers, railroad workers, and farm laborers and housewives. They celebrated labor through massive parades, the formation of cooperatives, strikes to win the eight-hour day, and political action to improve working and living conditions in hundreds of cities. Even though their organization expired by the end of the century, they passed on the lesson of solidarity to succeeding generations.

A second lesson — on the value of inclusive unions — comes to us from the efforts of workers in the 1930s, in the face of the most destructive depression in American history, to demand their right to form unions through a new organization, the Congress of Industrial Organizations. Aided by legislation (the Wagner Act) and a sympathetic Roosevelt administration, they built new unions in mass-production industries like steel, auto, meatpacking, electrical, and farm-equipment manufacturing. They did so from the bottom up. They preached the value of inclusion. As Ralph Helstein, the president of the United Packinghouse Workers put it, “We began with the CIO position … that all workers would be accepted into the union without discrimination.”

By the end of World War II, workers began to recognize that changing conditions in the American economy — the decline of old industries and the rise of a service sector — demanded new goals and new strategies. That reckoning would produce another “lesson” — that the right to union representation must extend to all regardless of what work they did. We witnessed a wave of new organizing among workers formerly excluded from collective bargaining — farm workers (UFW), public-sector workers (AFSCME, AFGE, NEA, and AFT & Postal Workers), and low wage service workers — many of them immigrants or minorities — who cleaned hotels and homes, served food, and cared for the young and the elderly.

With Labor Day in 2017, the labor movement in Iowa and across the country finds itself beleaguered again. This is not a new situation, though the specific historical circumstances are unique. We know that the decline in union membership correlates almost perfectly with the rising inequality we confront. We also know that employers and their allies in the Republican Party are working systematically to deprive workers and minorities access to the ballot. And we know we confront state and federal administrations and their corporate benefactors who are determined to roll back labor’s strength even further.

We must grasp hold of these historical lessons — solidarity, inclusion, the expansion of union rights — and build new coalitions prepared to defend these values and create a new era of union strength. As an old labor film put it: “Every generation has to do it again.” Let’s celebrate labor’s tradition, and then let’s get back to work rebuilding the unions that form the bedrock of our democracy.