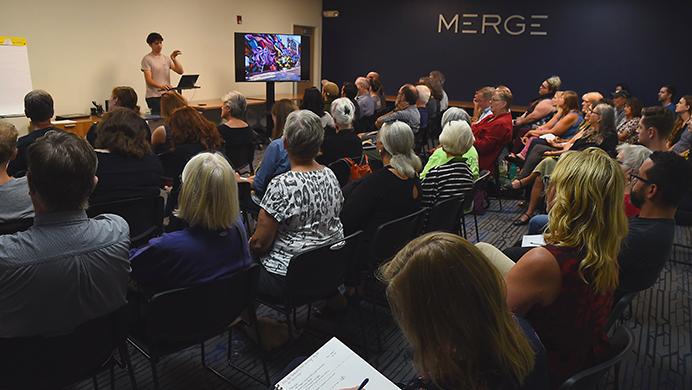 The Iowa City Downtown District met Wednesday at MERGE to discuss public art downtown with local artists, property owners, and people who want to see a revamping of the downtown façade.

Newly appointed Director of Public Art Thomas Agran showed examples of different murals and public-art pieces that could be emulated downtown — especially in alleys, where less-than-desirable activities might take place.

“What are the problems, and how can artists address them? Turning liabilities into assets and using an artist as a problem solver is what this is a placeholder for,” Agran said in describing a light-up mural in Philadelphia he displayed at the meeting.

The Iowa City Arts Commission has worked with the Downtown District on past projects, including the Welcome to Downtown Iowa City mural, construction decoration, and the mural at the Farmers’ Market, said Marcia Bollinger, the head of the Arts Commission.

There was also discussion of different murals that could be placed on the many blank walls downtown. Locations such as the parking ramp and US Bank were mentioned by community members as needing a new coat of paint, and ideas were tossed around of how to liven up the spaces.

“They see the murals as a way of inviting people in,” Bollinger said.

While the project is still in its first stages, it has garnered a lot of enthusiasm from the community.

“Just having this meeting brings the business people and the artists, it brings them together and builds the community that way, so even if this right here is the base point for other ideas, I think that’s fantastic,” local artist Rachel Cobler said.

There were many different groups represented at the meeting, and each contributed feedback and ideas on how to make it easier to create art downtown.

Proposals such as interactive art pieces that allow people to charge their devices with solar power were suggested as a way to bring both creativity and functionality into the community. Walls or parks set aside for graffiti and other public art would allow locals to express themselves without defacing public property, which would save the city and property owners money.

While plenty of ideas were discussed and fleshed out in the meeting, Agran said there was no way that the entire project could be figured out in one day.

“These conversations are big and long, and there is no way to get everything in,” he said.

Even though the project is still working out its kinks, many feel that it’s a great first step.