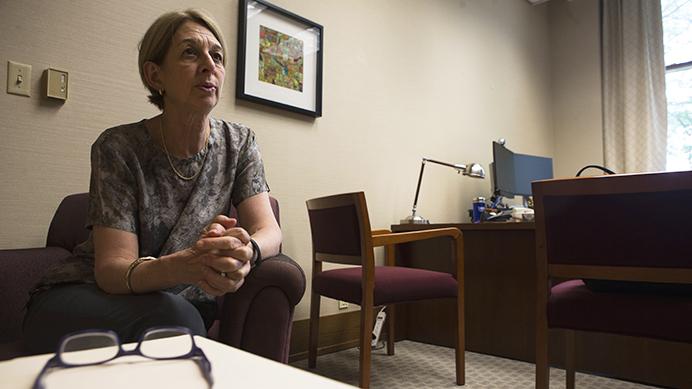 Interim provost Sue Curry speaks during an interview inside her office in Jessup Hall on Monday, June, 12, 2017. Curry began as interim provost in April after P. Barry Butler stepped down to take a position as the new president of Embry-Riddle Aeronautical University. (The Daily Iowan/Joseph Cress)

The University of Iowa will soon turn to the campus community to seek input about restructuring and streamlining its academic departments while working with more limited resources.

For Phase 1 of the Academic Structure 2020 study, a handful of University of Iowa deans collected information about departments over the summer. UI interim Provost Sue Curry presented updates on the deans’ work at the Faculty Council meeting in the University Capitol Center on Tuesday.

Prior to former UI Provost Barry Butler’s departure from the UI, he directed deans to conduct the Academic Structure 2020 study. It is an effort by the university to review Iowa’s college departments and degrees to help support the “limited resources for academic success,” Curry said, along with becoming an advanced, forward-looking establishment.

“The student experience is critical here,” she said. Issues such as general-education requirements and degree audits can get complicated as popular undergraduate degrees become more interdisciplinary rather than remaining in a single academic department, she said.

UI President Bruce Harreld said in a May interview with The Daily Iowan that the university’s academic structure has remained unchanged over the past couple decades as the work done in the UI has become more interdisciplinary. Meanwhile, other institutions “have continued to evolve theirs.”

“We have colleges and departments, so we have a structure in place,” he said. “But an awful lot of the work we’re doing, particularly from a research perspective, is actually more across. … Those types of issues, if you don’t study them every now and then and back up and say, ‘Where are we,’ and you stay where you are for a 20-year period.”

Psychological and brain sciences Professor Ed Wasserman called for information to not only be gathered from the UI, but also collected from other universities as well to use as benchmarks while the UI makes organizational changes.

Members of the faculty group raised questions about the quality and type of information that had been gathered in Phase 1. History Professor Katherine Tachau disagreed with Phase 1’s small scope of engagement being limited to a few academic deans.

“Faculty need to be involved in that beginning phase,” she said. She argued that faculty engagement in the study would be key to bridging the students and UI administration.

Curry said although Phase 1 does not have the wide-ranging involvement with faculty, students, and staff that faculty members had wanted, the process was conducted with the UI’s Strategic Plan in mind. The main goals outlined in the plan include Research & Discovery, Student Success, and Engagement.

The results from the Phase 1 report will be used to kick off Phase 2, which is exclusively focused on receiving feedback from the whole UI community, Curry said. The goal of Phase 2 is to broadly and openly engage the campus in response to the suggestions gathered while compiling the Phase 1 report.

There will be a steering committee charged with “collecting, synthesizing, and creating a Phase 2 Report,” Curry said. Tom Rice, the academic director of the UI Pappajohn Education Center in Des Moines, has been selected to lead the committee to steer the direction of Phase 2. The committee will host town halls, along with constituent meetings, to try to get as many points of reference as possible.

Open engagement for Phase 2 will last until the end of the calendar year, giving the committee plenty of time to review all submitted resources, Curry said. The Phase 2 report is slated to be released around the start of the spring 2018 semester once all the information is processed.

“We’re building this plane as we fly it,” Curry said. “Our goal isn’t to become someone else; it’s to be the best that we can be.”