Volleyball went 2-1 at the LBSU Invitational over the weekend, securing victories against Wright State and Long Beach State. 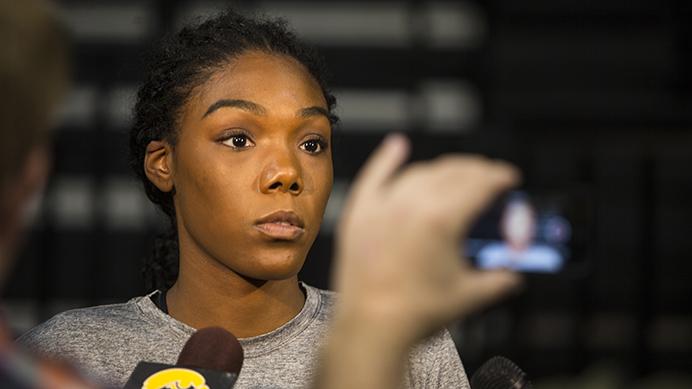 Iowa outside hitter Taylor Louis (16) talks with members of the media during volleyball media day in Carver-Hawkeye Arena on Friday, Aug. 18, 2017. The volleyball team will host their Black & Gold scrimmage tomorrow at 2 PM in Carver, which will be free to the public. (Joseph Cress/The Daily Iowan)

Hawkeye volleyball had a successful opening weekend in Long Beach, California, winning two out of its three matches in quick fashion.

To start out the weekend, the Iowa came out victorious against Wright State, 3-0.

Iowa’s defense proved to be dominant, holding Wright State to a .122 offensive-attacking percentage during the three sets.

Junior Marquette transfer Taylor Louis proved that she will be a driving force on the front row, gathering 6 kills in the first set alone and 13 overall against the Raiders.

The Hawkeyes started off slowly but battled the Raiders through 10 different lead changes.

Freshman Claire Sheehan broke a 13-13 tie and sent the Hawkeyes on a 7-1 run. The Raiders reciprocated, gaining some points back, but a kill by junior Reghan Coyle ended the set 25-22.

“We have three young players out there and a couple of new players in different positions,” head coach Bond Shymansky said in a release. “It was a little rusty at times, but we got it going. You can see as the match went on, our offense started getting better, our passing got better and everything improved as we went through the course of the match.”

On Aug. 26, Iowa started out strong facing No. 2 Stanford.

The Hawkeyes held on during the first set, keeping it tied at 10 until the Cardinal charged ahead on a 6-2 run.

The next two sets were similar to each other, as Stanford went on an early run in both sets and never looked back, winning 25-16 and 25-10.

Sheehan shone again for the Hawks, recording 5 kills and 2 blocks in the second set.

“I liked that we were competitive, and I thought we executed well,” Shymansky said in a release. “We just let a couple of little points get away. We talk about that 2-point difference. We just have to find a way to get 2 points against great teams, and Stanford is a great team.”

The last match for the Hawkeyes versus Long Beach State on its home court proved Iowa had prepared for the season.

The first set was a battle, with nine ties and two lead changes. Freshman setter Gabrielle Orr and Coyle tallied back-to-back kills with the score tied at 23 to win the set.

Neither team let up going into the second set, with a total of 20 ties and seven lead changes.

Long Beach came out on top to tie the match at 1.

The Hawkeyes fell behind 6-4 in the third set but went on a 15-6 run and never looked back.