The Iowa City chapter of the Democratic Socialists of America has only been here a few months, but their popularity has swelled immensely. 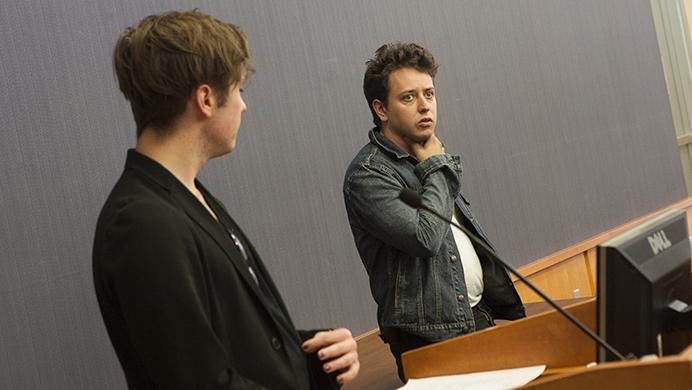 With only six months of full operation, the Iowa City chapter of the Democratic Socialists of America has witnessed a surge of popularity that no one expected; at the group’s regular monthly meeting Aug. 26, there were not enough chairs for everyone in attendance.

“When we started this chapter, I could not imagine this number of people in a room for a meeting like this,” said Rose Fiala, a co-chair of the organization.

Some of those in attendance were regular members, but a large percentage of the room was made up of people who hadn’t been involved before the meeting.

Socialist ideas have been a trend in the last couple of years. Before the 2016 election, the national socialist group had only a few thousand members, but after Sen. Bernie Sanders campaigned against Hillary Clinton and Donald Trump as a democratic socialist, those numbers began to swell rapidly. They grew even more after the election’s conclusion, Fiala said.

Anna Hankins is not a resident of Iowa City, but she attended the latest meeting.

“I have a lot of friends who are involved in [the group] in other cities, so I’ve basically seen other people get pretty involved in it,” she said. “I went to check out to see if Iowa City had a chapter.”

The Iowa City group has many organizations that it works closely with to put on events and shine the light on issues that the members believe are important. Going to the monthly meetings is good, but there are plenty of ways to get involved beyond that, Co-Chair Emmett Rensin said.

“The most essential thing you can do, and what I find is the most satisfying, is getting involved in the actual work we’re doing day-to-day,” he said.

The group discussed certain actions, such as raising the minimum wage to $10.10 and hour, holding a transformative-healing event, and planning what the chapter should focus on in the future.

“It’s important to me to be focused on what we can actually accomplish in Iowa City and what we can do for people here,” Rensin said.

The members also seek to establish themselves as a serious organization in the city and not a group of enthusiasts that will break apart after a little while, he said.

The task is a difficult one since the local group has only been here for six months, Rensin said, but the members are willing to put in the work.

“This is a for-real organization that is here, and we’re willing to turn out and do the work,” he said.