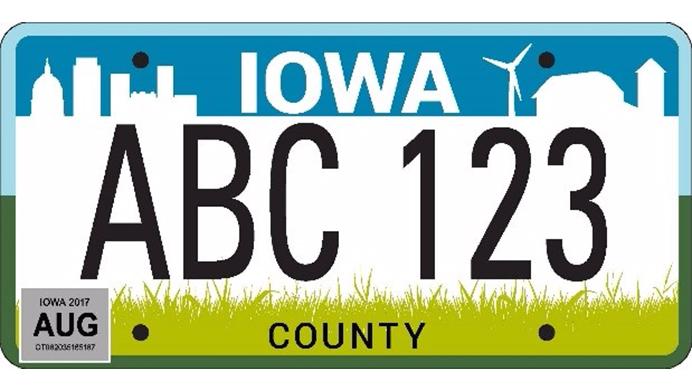 The debate was form over function when the winning license-plate design was revealed Monday by the Iowa Department of Transportation.

On Monday, the Iowa Department of Transportation announced the winning “City and Country Reboot” as the new design for the state’s license plates.

The design was months in the making and involved everyone from Gov. Kim Reynolds to everyday Iowan.

“It really is kind of a revamp of the current plate that we have; it’s just an update to that both city and country theme that we have, talking about how we have a nice mix of urban and rural in our heritage,” said Andrea Henry, the DOT director of strategic communications. “The colors really evoke growth and nature and wellness; we really felt like the blue and the green were kind of natural elements, with water and the green and [both natural and figurative] growth.”

The design had to meet rigorous state and national standards, such as legibility of the state name, letters, and numbers.

“As much as people want to see license plates as little traveling pieces of art, they really are a tool, and they have a very specific purpose, which is to identify your vehicle to law enforcement and to other people in certain circumstances …” said DOT Director Mark Lowe.

He said this is the first update to the plate design since 1998, and it was expected that not everybody would be happy with the choices. The DOT designs were met with online criticism from Iowans across the state, touted as what some called bland or ugly.

John Bosley, the owner of Des Moines-based graphic-design business Bozz Prints, was among those who felt the three options presented by the DOT both lacked punch and didn’t showcase the state’s charm.

“For me, a license plate is something you see every single day, and it’s probably the first thing that a lot of people see when you cross into a new state,” Bosley said. “It’s your first chance to, oddly, make a first impression, for lack of a better word.”

Last year, he created a print of Iowa for his graphic-design business, and upon hearing the Iowa DOT would change the license plates, he decided to post his own designs online. His designs were met with positive responses on Facebook, Twitter, and Instagram, garnering hundreds of likes and shares. The DOT was unable to accept Bosley’s design for the plate because it didn’t meet the required standards and because it was too late to introduce a secondary designer into the process.

“It’s important to me as a designer and as an Iowan that we have decent representation on a license plate, if at all possible,” Bosley said. “I see it as a piece of moving art, but I’m in the minority. It’s definitely a tool, it’s definitely a utilitarian device to identify vehicles, and there’s only so much room for art and personality on there unfortunately.”

Henry said the new plates come at no cost to the state and will be rolled out slowly over time. The first of the new plates will begin popping up in in the first quarter of 2018, Lowe said.