Ex-Hawk wrestler takes on the World 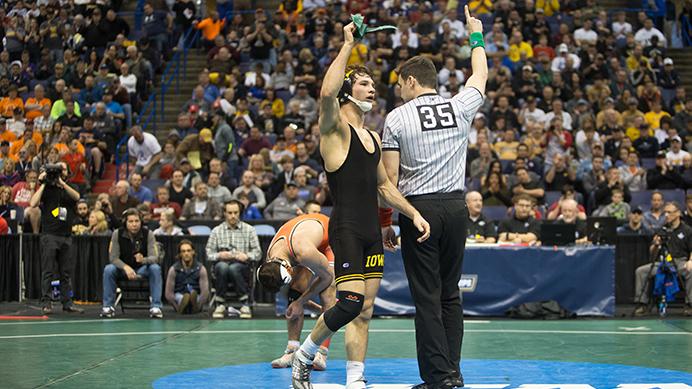 Iowa’s Thomas Gilman celebrates a third place victory during the 2017 NCAA Division I Wrestling Championships in the Scottrade Center in St. Louis, Missouri on Saturday, March 18, 2017. Day 3 brought about many surprises and a great wave of new champions. Iowa came in fourth overall with a team score of 97. (The Daily Iowan/Anthony Vazquez)

Thomas Gilman may not have earned the NCAA crown during his time at Iowa, but he has the opportunity to earn a world title this week.

The former Hawkeye will have his first match at the 2017 World Championships in Paris today at 57 kg against Ukrainian wrestler Andrey Yatsenko.

Even with the disappointment that came at nationals, Gilman is solely focused on the road ahead of him.

“I’m too busy to worry about what went on in March. My mind is filled with information,” Gilman said. “I dealt with it in March, and that’s all that needed to be done. There’s no dwelling on it, I’ve got to move forward. I’ve got a World Championship to take.”

RELATED: Gilman takes the spotlight ahead of NCAA’s

Since making the national team, Gilman has been training with Titan Mercury Wrestling Club. He has spent time abroad, having traveled to Spain for the Grand Prix of Spain in World Championships. Gilman finished with a 3-0 record there to take home the gold.

En route to the title, Gilman saw Canada’s Steven Takahashi and Spain’s Levan Metreveli before defeating Zoheir El Ouarraqe of France 10-2 and 3-1 in the final.

Iowa head coach Tom Brands has continued to work with Gilman during his training for Worlds and has been by his side since the wrestler first arrived in Iowa City.

“He has goals and aspirations that he wants to attain,” Brands said. “Regardless of what happens prior to that or during those earlier goals, if he has a setback, it’s not going to derail him from what he’s trying to accomplish for the rest of his life.

“I know all of these guys are capable,” he said in a release. “My hope for them is that they are smart and tough. I know they are well-prepared, are physically prepared, and they are good athletes. They have been winners at all levels. You still have to do it on the day, between the whistles. If we wrestle with great attitude, are exciting, and are smart and tough, we will be in a good spot.”

Gilman is quite familiar with what he has on his upcoming slate.

“I’m very familiar with these guys; I’ve been watching them for years,” Gilman said. “I’m no stranger to what they’re good at and what they’re trying to do. I’ve been studying them … because I knew one day I’d be wrestling them.”

And even though he’s the newer guy on the international wrestling scene, he’s not worried.

“I think new can be scary.”