The Hawkeyes will represent the U.S. at the World University Games in Taipei, Taiwan, with the opener against Mexico scheduled for 5:30 a.m. (CDT) Aug. 20. 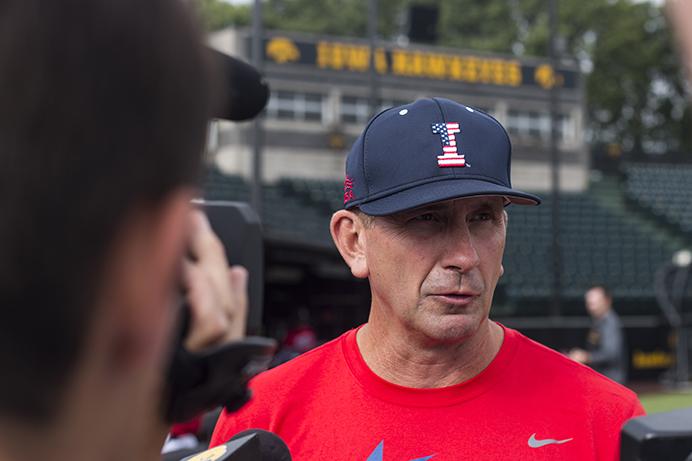 Iowa head coach Rick Heller speaks with members of the media before a baseball practice at Duane Banks field on Tuesday, Aug. 15, 2017. USA claimed its first medal in the World University Games on Tuesday after losing to Japan, 10-0, in the gold-medal game. (Joseph Cress/The Daily Iowan)

Iowa baseball is taking another trip.

After winning the Big Ten Tournament in Bloomington, Indiana, and playing in the NCAA Regional in Houston, the Hawkeyes will head to Taiwan to represent Team USA in the World University Games.

It’s something that has been in the works since August 2016, and with support from the school administration, it has come to fruition.

“It was intriguing to me, and honestly, it was something that I thought about personally, because the chance to represent the USA on a world stage doesn’t come around very often,” head coach Rick Heller said. “To have our school and our players be able to have that experience, I thought it would be fantastic if we could make it work out.”

In November 2016, the Hawkeyes traveled to the Dominican Republic, a way to help the team grow not only in baseball but in camaraderie.

After the success that occurred the following season, the Hawkeyes hope the same will happen again. The Hawkeyes will take in the culture of Taiwan and compete against countries from around the world in a once-in-a-lifetime opportunity.

“It’s pretty amazing; you’ve [got to] pinch yourself sometimes because it feels like yesterday we were just in the Dominican and now we’re heading to Taiwan for two weeks,” outfielder Robert Neustrom said. “It’s unbelievable. It’s an experience I’ll never forget, and I know a lot of these guys won’t ever forget, either, so we’re all just really excited.”
RELATED: Baseball waltzes, then heads to tourney
Allgeyer moves past Tommy John surgery
Junior pitcher Nick Allgeyer redshirted for the 2017 season after undergoing Tommy John surgery.

His return to the mound couldn’t come at a better time, because Iowa lost its pitching strength to the MLB Draft and graduation.

“It hurts a lot to lose [Nick Gallagher] and CJ [Eldred],” Allgeyer said. “They were a big part of what we had. [Ryan] Erickson was a senior, but he was a big part of our rotation last year. But also, in the fact that we [lost] them, it’s [given] me the opportunity to want to be a starter this year.”

Allgeyer said a positive mindset kept him on a successful path to recovery.

The Hawkeyes have only three pitchers with Big Ten experience on the roster: Allgeyer, Elijah Wood, and Kyle Shimp.
Marty moves up
Marty Sutherland, formerly an assistant on Heller’s staff, is now the associate head coach of the Hawkeyes.

“Marty’s hard work and dedication have been a big reason for our successes the last four years,” said Heller in a release. “He has done a tremendous job heading up our recruiting and with our player development on the field.”

Before coaching at Iowa, Sutherland coached and played under Heller at Northern Iowa. He was one of the Panthers’ assistant coaches from 2003-2009.