The state Board of Regents approved a nearly $10 million proposal to replace the existing Finkbine clubhouse with a new facility, set to open in 2019. Plans for a nearby hotel will be considered later in the fall. 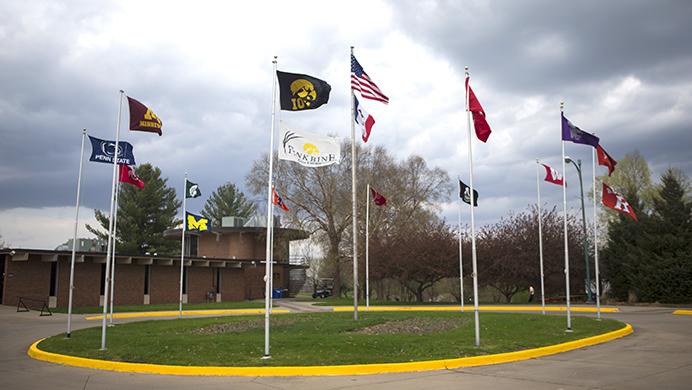 Plans for a new University of Iowa facility may position the UI as a championship-level tournament site.

The state Board of Regents approved the schematic design, project description, and budget for a nearly $10 million Finkbine Golf Course Clubhouse during a telephonic meeting on Wednesday.

Gifts to the Athletics Department, whose budget is separate from the university’s general operating budget, will be used to fund the project.

Construction is expected to start in the spring of 2018, and the facility should be open in the spring of 2019. At that time, the existing 52-year old clubhouse facility, located at 1380 Melrose Ave., will be demolished, said UI Business Manager David Kieft on Wednesday.

Regents’ documents show the facility will include dining space, a retail pro shop, and enhanced men’s and women’s locker rooms.

“We are extremely excited to complement our collegiate course with this new clubhouse,” said Tyler Stith, the men’s head golf coach, in the statement from the Athletics Department. “This allows us to host future NCAA championship events and enhances the level of experience we are able to provide our student-athletes and community.”

Approval of these plans comes after the regents OK’d a proposal in September 2016 to proceed with project planning. This request prompted an examination of adjacent facilities, Kieft said.

In June, UI Senior Vice President for Finance and Operations Rod Lehnertz and former Vice President for Student Life Tom Rocklin announced in a letter to members of the University Club, 1360 Melrose Ave., which is not operated by Athletics, that the facility would close in September 2018.

To ensure best use of UI real estate, later in the fall, Kieft said, the UI plans to issue a proposal for the construction of a hotel that would be operated by third-party developers. It would serve the surrounding campus area, UI Hospitals & Clinics, and the golf course, he said.

“That will allow us to make the most of the two sites,” Lehnertz told The Daily Iowan in July. “There will be dining in the clubhouse that will also serve the hotel. The two will be able to work together and serve a wider audience of the public. Additionally, its proximity to the UIHC complex makes it a site where families who have patients that are in the hospital will have a nearby hotel, but also some small conferencing that will enable smaller units within the hospital to have conferencing capabilities very close to the hospital.”

The nearby structure approved on Wednesday will be a two-level, 23,000-square-foot clubhouse built south of the existing facility, Kieft said.

“We are excited to create a clubhouse that matches one of the finest golf courses in the state,” said Gary Barta, the UI  Tippie director of athletics chair, in a statement from the Athletics Department. “Our vision is creating a year-round facility that brings friends and fans of the university and community together in an enjoyable, casual atmosphere.”