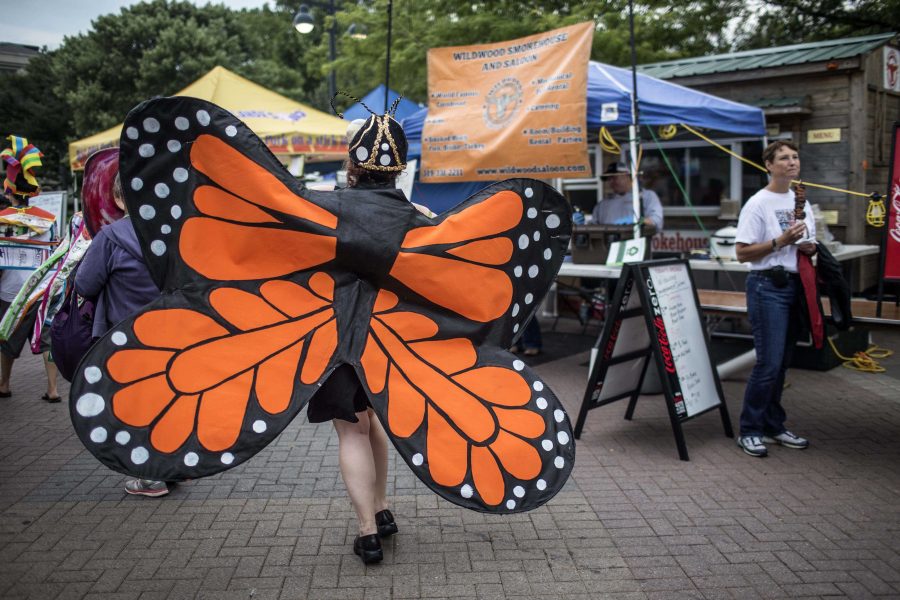 A girl dressed as a butterfly in the Carnaval parade makes her way through downtown Iowa City on Friday, August 28, 2015, during the Iowa City Soul Fest. 2015 marked the ninth year of the festival and the first year with the parade. (The Daily Iowan/Sergio Flores)

Steaming into downtown brimming with hundreds of years of African and African-American culture, the Iowa Soul Festival will immerse area audiences in food, art, music, literature, business networking, and more kinds of dancing than seem possible.

The festival, on Friday and Saturday, celebrates the tremendous effect the cultures have, and have had, on the Iowa City and Creative Corridor area. It will feature local, regional, and national artists, including TL Williams and the Storm Chasers and headliner Sidewalk Chalk, among many others.

Diversity Focus created the festival in 2013, and Hancher also has supported the event, said Lisa Barnes, the executive director of Summer of the Arts. The current sponsor is MidWestOne Bank.

“When Hancher opened its new building and Diversity Focus folded, we were forced to scale down the festival because we didn’t have the same level of funding,” Barnes said.

But that hasn’t toned down the level of inspiration.

“We also expanded the programming to include a Black Authors Panel as well as a Black Entrepreneurs Panel and a fashion show,” Barnes said.

Diversity Focus originally pushed for creating the festival is set after the organization conducted studies that showed representations of African and African-American culture were lacking in the area, Barnes said.

“I think it is a great opportunity for the community at large to learn more about the culture as well as the African-American and black community to come together and celebrate their culture,” Barnes said.

KCCK Development Director Lisa Baum, Barbara Haack, a member of the Soul Fest Committee, and Keisha Jenkins volunteered to create an end-of-the-weekend dinner, which will include Southern-style soul food, local gospel music, and dancers. Tickets are $35 each and should be purchased online in advance.

The Soul Fest will finish the weekend with that Gospel Sunday Dinner at the Sheraton Hotel, 210 S. Dubuque St., at 1:30 p.m. Aug. 6. All proceeds from the dinner will be donated to the Dream Center, 611 Southgate Ave.

“[The Dream Center has] an after-school and summer program for kids in the southeastern part of town, and when I go to the Dream Center, it’s always hopping with kids and activities,” Baum said. “I think Fred is really trying to do something important.”

Frederick Newell, the founder of the Dream Center, said he created the organization to support families and help the increasing number of youth who experience uninvolved and/or absent fathers.

“There was a need in the community, at that particular time; our focus was on young men of color as well as providing a space for single dads to have a space to kind of come, and learn, and grow together,” Newell said.

He has a long-term goal to continue making an impact on the lives of young people and strengthening families, he said.

“I believe Iowa City is a growing place, especially with more minority families moving in,” he said.