Police, community bond in Night Out 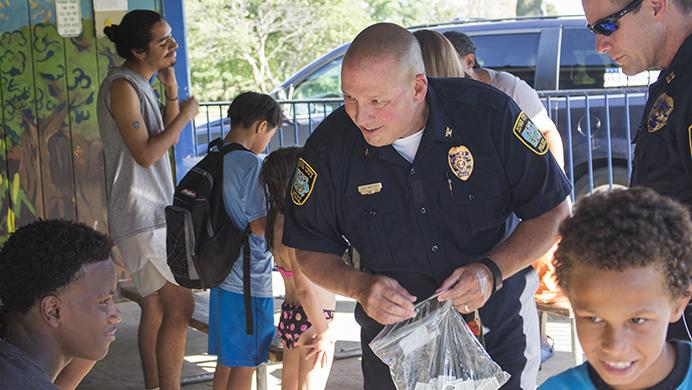 Iowa City Police Chief Jody Matherly hands out temporary tattoos to kids at the National Night Out in Weatherby Park on Tuesday, August 1, 2017. The event gives the community a chance to meet with police officers. (Gage Miskimen/The Daily Iowan)

The police join the community for the 34th-annual National Night Out in an effort to build trust among neighborhoods and the department.

The sounds of music and kids playing filled Wetherby Park on Tuesday as community members came together to get to know each other and meet the police officers of the neighborhood.

The event was put on by the National Association of Town Watch and sponsored locally by the Iowa City police. Nationally, around 15,000 communities partake in the annual event from all 50 states, and event organizers estimate more than 38 million people participate in the events nationwide.

“Anytime you open the conversation with law enforcement and the community, it helps with trust and getting to know the community,” he said. “Anytime we can do that, it bridges a potential gap, and that’s our main goal.”

A 2016 Gallup Poll says 56 percent of Americans have confidence in the police, up 4 percentage points from 2015, which was the lowest percentage in 22 years.

Another Gallup Poll states 76 percent of Americans have a “great deal of respect” for the police in their area, a 12 percent point increase over 2015.

Sara Torres, an Iowa City resident who attended the event with her kids, said events such as these are important to build relationships with the police as well as the neighborhood.

“Sometimes, we see police officers portrayed in a negative light these days, so when they can be at events like this, and participate, and play with children, it builds trust in the community,” she said.

Ashton Hayes, the Iowa City community-relations officer who has led the event for two years, said it creates a lot of events with the community in her position.

“I help with these different community events so people can come talk to us, have coffee with us, play bags with us,” she said. “We want to get to know the people in the neighborhoods.”

Along with meeting the officers, kids of the neighborhood played bags, jumped in the splash pad, ate watermelon, and put on temporary tattoos of a police badge. The police also gave out Frisbees and fidget spinners.

Cash said the department also partnered with Target to give out school supplies for children. Random names were drawn, and the winners were given backpacks full of various school-related items.

Valerie Kemp, one of the original organizers of the Iowa City National Night Out and a former probation officer, said it’s nice to continue this particular event and others like it for sake of community bond.

“I think it’s incredibly important to understand when they’re on duty, they’re doing their job. You may not like it sometimes, but events like this puts human faces behind the officers,” she said. “If a neighborhood knows their officers, they can mutually work together to keep the neighborhood safe.”