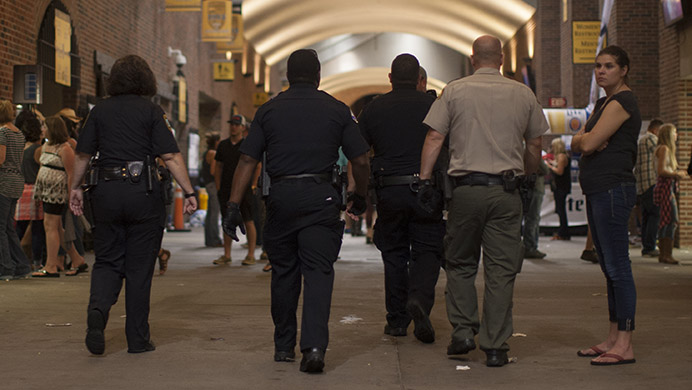 FILE- In this August, 27, 2016 file photo, police officers patrol Kinnick during the Back Porch Revival. Police arrested four people during the event which was the first concert in the 87-year old stadium and also served alcohol. (Margaret Kispert/The Daily Iowan, file)

An encounter at the Johnson County Fairgrounds with law enforcement made me thankful that the Sheriff’s Office protects freedom of speech.

We often hear criticism about law enforcement, so I wanted people to hear my story.

I am a disabled Marine veteran. I was protesting with a friend last week at the Johnson County Fairgrounds; we opposed the children’s rodeo and were peacefully and legally expressing our views on public property near the entrance to the fair. We oppose the rodeo because concern about the treatment of the animals and because we believe that participating in these events teaches children to repress their natural sense of compassion and empathy for animals.

On the second day we were there, two teenage boys came out with a large 4H banner and began harassing me while standing directly in front of me. I am in a wheelchair and could not see over or around their banner, and the public could no longer see my sign. When I moved to a different position, the boys followed me and again blocked my view. This happened five or six times and was continuing, so I called the Sheriff’s Office to request that a deputy come to clarify the legal bounds of our protest. Sgt. Brad Kunkel obtained a body camera and came over to talk to me as well as the boys and their friends who had gathered to support them.

Kunkel was very professional in explaining to them that I/we had a right to be there and that they needed to find a different place to stand.

Freedom of speech is a constitutional right that I defended as a Marine. I want to thank all of the staff from the Sheriff’s Office who were present while we were at the fair, especially Kunkel. It’s their continued service to our local communities that ensures our safety and constitutional freedoms in America.