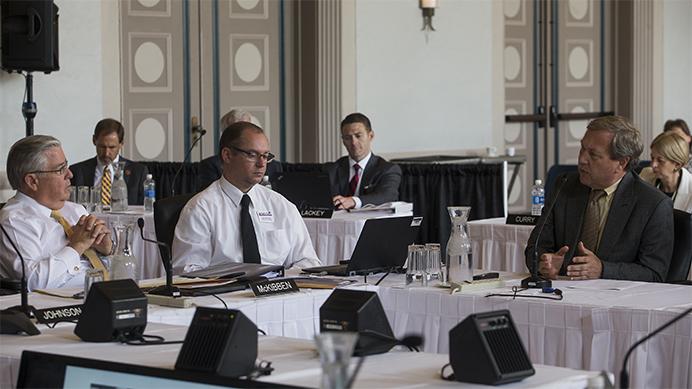 University of Iowa President Bruce Harreld speaks to Regent Larry McKibben during a state Board of Regents Meeting on Thursday, June 8, 2017. McKibben chairs the regents' Tuition Task Force, which will convene three times this summer to discuss the realities of higher-education funding in Iowa. The regents decided to cancel the first of four meetings for the task force, which was scheduled to take place in Des Moines on July 27. (The Daily Iowan/Nick Rohlman)

Shared efforts to address the trend of state disinvestment in higher education have been put on hold, it seems for some state legislators.

On Monday, the state Board of Regents canceled the first of four scheduled meetings of its Tuition Task Force that had been set to take place in Des Moines on July 27.

“We are disappointed that the Tuition Task Force meeting with legislative and economic stakeholders could not be arranged,” said University of Iowa Student Government President Jacob Simpson and Vice President Lilián Sánchez in an email to The Daily Iowan. “However, we look forward to participating in the University of Iowa campus listening session. We encourage all students to stay informed and engage in the work of the Tuition Task Force.”

The key feature of this task force is its involvement of people working both inside and outside academia. It includes regents, university representatives, and the public as well as legislative, economic, and business-development stakeholders.

“We think it’s probably important to have a stakeholder meeting this summer as part of this task force … in a bipartisan way to just talk about what the funding is going to be going forward for the public universities so that we can plan on what those numbers will look like going forward from a tuition standpoint if the state isn’t going to be there as a partner,” he said.

Sen. Tim Kraayenbrink, R-Fort Dodge, the chair of the education appropriations subcommittee in the state Legislature, said with his experience as a financial adviser, bringing these stakeholders into the discussion about higher-education funding is important.

While the regents have voiced concern about the lack of predictability in higher-education funding, Kraayenbrink said the state, too, would like more predictability in the revenue it receives to fund education and other services and programs. This would enable the Legislature to commit to a dollar value after knowing the actual outlook for revenue.

Until that can happen, he sees the continuation of tuition increases being an “it is what it is” situation.

Beth Townsend, the director of Iowa Workforce Development, was supposed to present at the canceled meeting. The organization’s communications director, Cory Kelly, declined to comment.

Rep. Cindy Winckler, D-Davenport, was scheduled to present at the canceled task-force meeting. She said the current process of forming the budget in which university presidents give presentations to the education appropriations subcommittee has not been effective.

For the sake of students and businesses that are looking for high-quality, highly educated workers, the state needs to be more serious about the role it can play in funding higher education, she said.

“I would encourage any representative or any senator to understand the bigger picture of what that means for us as a state and our ability to compete if we price our higher education out of the market,” she said. “If we price ourselves out of the market, we will not able to attract and retain the workforce that we know we need as a result of many of the baby boomers retiring.”

Sen. Herman Quirmbach, D-Ames, a ranking member of the Senate Education Committee who would have presented at the first task-force meeting, said he planned to emphasize the reversal in universities’ funding in recent decades.

Data provided to The Daily Iowan by the UI Office of Finance and Operations in December 2016 revealed that in fiscal 2001, state appropriations composed 61.58 percent of the UI’s budget, and tuition revenue made up 30.32 percent of the budget.

Since then, the data showed, less of the budget has come from tax dollars. In fiscal 2017, 31.55 percent was from state appropriations, and tuition revenue contributed to 62.47 percent of the budget.

RELATED: Tuition on the loose again

Quirmbach said these meetings should occur when students and faculty are on campus to provide input, and he does not approve of the decision to not reschedule the meeting with stakeholders outside of academia.

“It doesn’t look to me like they’re all that seriously interested in getting feedback from the people who are most directly affected,” he said.