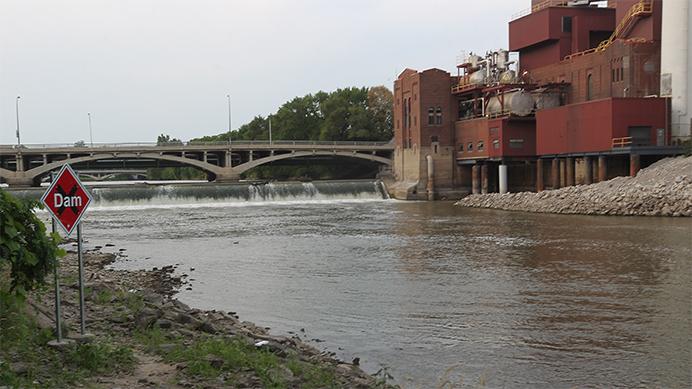 The Iowa River is seen on Tuesday, July 25, 2017. The DNR recently announced the launch of a program that would localize volunteer water quality monitoring efforts in Iowa. Steve Konrady, program planner for the Iowa DNR, said the DNR will likely phase out the IOWATER program begun in 1998, to be replaced by the new program. (Jim Geerdes/The Daily Iowan)

The Iowa Department of Natural Resources has launched a new locally based volunteer program for monitoring water quality.

“While volunteer water monitoring has been a component of the DNR since 1998, this program will shift to a locally led focus to better serve partner communities, organizations, and citizens,” the DNR said in a June 20 press release.

Steve Konrady, a DNR program planner, said the program shift is a response to staffing issues caused when the coordinator of the IOWATER project left and the natural-resources agency was unable to find a replacement.

Konrady said delegating responsibility for monitoring efforts to local agencies through the new program should help fill the gap.

The new program should also resolve issues with the IOWATER database, which hasn’t been updated for approximately two years because of budget issues, Konrady said. The DNR hopes people choose to make their data publicly available through the EPA’s more robust system.

Konrady said the DNR is focused on shifting people to the new program.

“We hope that existing volunteers, if they’re still active, get connected with a local project,” he said.

There isn’t an existing database of watershed projects in the state, but Konrady said the DNR is working to create one.

“That might take a while,” he said. “We’d be talking next year as far when we’d know a summary of what groups are active.”

For now, the DNR directs people to other lists of watershed projects in the state through its volunteer monitoring website.

“It can be a watershed project, a watershed management authority, a county conservation board, a city group that’s looking to do this, a university,” he said.

Konrady said the DNR expects turning the program over to local agencies will make water-quality-monitoring efforts more sustainable and give volunteers more flexibility and ownership over the data they collect.

Otherwise, he said, not much will change in terms of the work that’s done.

“The DNR will provide locally led project leaders with training if needed, and then local volunteers will get trained by and work with those leaders on sampling coordination and data reporting,” said the DNR press release.

People of all ages and interests can and do participate, Konrady said.

“It’s pretty simple in the end. If you’ve ever done … a pH test strip, that’s about as hard-core as it gets for the water-quality tests that we do,” he said.

Konrady said people have responded well to the new program so far.

“There’s been a handful from Cedar Rapids, a couple from Iowa City, and a few from other eastern Iowa regions,” he said.

“We’re a new program,” said Ginny Malcomson, the water-quality program coordinator for Polk County Conservation. “We have one year under our belts, and we’re nearing the end of our monitoring season.”

She said the Polk County Water and Land Legacy bond initiative has given the group the finances it needs to support the monitoring program.

“We had [the] initiative in 2012, and the voters accepted it by 72 percent,” she said. “That tells that public is really concerned about water quality.”

“We’re just now bringing on public volunteers,” she said. “We’re just getting them started, but it seems like they’re very excited and dedicated. I think there’s a level of involvement that you wouldn’t have from a less [local program].”