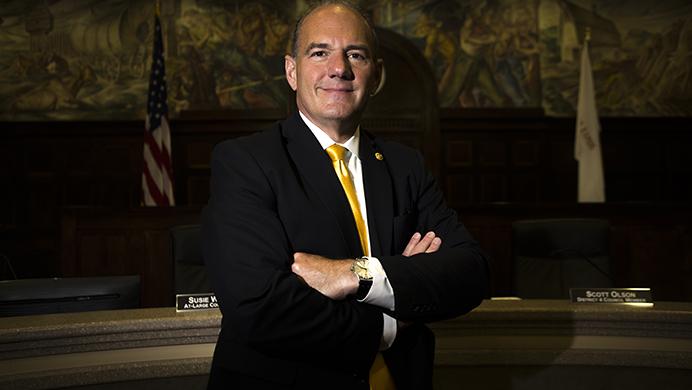 A year out from the 2018 gubernatorial election, and the Iowa Republican Party is throwing its weight behind Gov. Kim Reynolds, but Ron Corbett, the Republican mayor of Cedar Rapids and candidate for governor, remains undeterred.

But with 13 years in the Iowa Legislature, the last five of which the 56-year-old Corbett spent as speaker of the House, and eight years as mayor of Iowa’s second largest city, Corbett said his experience is equal to Reynolds’.

Corbett’s biggest struggle will perhaps be the uphill battle against an incumbent governor.

“All the party establishment and the donor class has rallied behind Kim,” he said.

Before Terry Branstad was nominated to be the U.S. ambassador to China, most observers didn’t think he would run for re-election in 2018, said Tim Hagle, a University of Iowa associate professor of political science. Reynolds, 57, was expected to run but not as an incumbent.

“In Iowa, we kind of like our incumbents, so it makes it harder — even for the other party — to run against them … When there’s an open seat, you have more interest,” Hagle said. “Now that Branstad is gone and Reynolds is the governor, for all intents and purposes, that makes her the incumbent.”

So far, Steven Ray, the mayor pro tem of Boone, is the only other Republican to announce he will run against Reynolds.

Patrick Wronkiewicz of the UI College Republicans said members of his group think Reynolds, as the incumbent, has the best chance to win the 2018 gubernatorial election.

“Our organization as a whole endorsed Gov. Reynolds for the election above all the other candidates and potential Republican candidates,” Wronkiewicz said. “Ron Corbett would be better than any of the other Democratic nominees, but we like Gov. Reynolds’ chances.”

“That was one reason, when he published his book [Beyond Promises], he went around the state on a book tour,” Hagle said. “Ostensibly to talk about the book and political stuff, but it was also a way for him to try to increase his name recognition.”

Corbett faces other obstacles, too.

“The financing is a part of this as well,” Hagle said. “Kim Reynolds has a pretty good war chest at this point and will certainly be doing additional fundraising over the next year or so.”

Corbett is sure he’s going to be outspent, but Hagle said Corbett hasn’t done too poorly himself.

Donations and pledges to Corbett’s campaign have reached nearly $1 million.

The money will help Corbett get around the state, which is what he’ll need to do if he wants to be a serious challenger to Reynolds in the Republican primary, Hagle said.

The primary campaign should also give Corbett another chance to increase his name recognition.

“It’s usually good to have a primary,” Hagle said. “It can be a danger because if you have a nasty primary and the candidate … comes out damaged, politically or financially, then that can hurt for the general election.”

Primaries also give candidates a chance to get in shape politically, helping them hone their message, he said.

“Iowa is a slow-growth state. … We’re starting to see the signs of a slow-growth state manifest itself in the state budget,” Corbett said. “We need to modernize our income-tax system and provide more growth for our state and more budget stabilization.”

“It takes a little more time, because you have to go out, and meet with people, and talk to them about their issues, and try to build consensus,” he said. “Sometimes, top-down works faster, but you get problems.”

Corbett said the state of Iowa’s health-care industry is a result of top-down decision-making.

While interviewing Cedar Rapids Mayor Ron Corbett on his plans to take on incumbent Gov. Kim Reynolds in the 2018 GOP gubernatorial primary campaign, he shared his early history owning an ice cream company.

Iowa’s performance in K-12 education is another important issue for him.

Corbett is also a strong supporter of the 3/8 penny tax for the Natural Resources and Outdoor Protection trust fund.

“If that were to be funded, we would have the resources to improve our water quality and take care of some of the flooding issues that Iowa seems to have almost every year,” he said.

Right now, Corbett said, the burden for conservation and water quality rests on farmers and their ability to invest in sustainable solutions on their own.

“Our water-quality efforts shouldn’t be based on the price of corn,” Corbett said. “It has to be ongoing, it has to be sustainable, and that’s the beauty of the trust fund.”

Corbett might be an underdog, but he doesn’t see himself as a fringe candidate.

• Youngest speaker of the house at 34 years old

•  Took over governorship at the end of May from Branstad, who became the U.S. ambassador to China