A room with a Vue for Iowa City 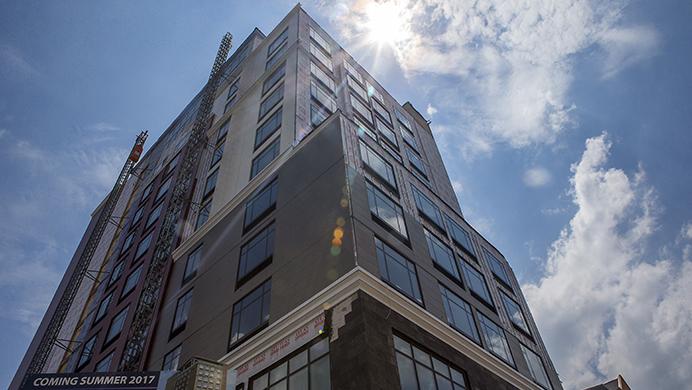 The Hilton Garden Inn on Clinton Street is seen on Tuesday. The 12th floor of the hotel will feature a rooftop restaurant/bar accessible to both Hilton rewards members as well as guests and community members. The hotel expects to open to the public in October 2017. (Joseph Cress/The Daily Iowan)

The Iowa City Downtown District expands skyward with the Vue, a new rooftop bar and restaurant.

The Iowa City skyline is slowly filling with new buildings, and now, that downtown expansion is aimed skyward with the Hilton Garden Inn’s new rooftop bar and restaurant, the Vue.

Kinseth Hospitality is tackling the project, hoping to create the premier hotel and rooftop bar location in Iowa City.

The Vue is taking reservations for Jan. 1, and Ben Kinseth, the director of operations for Kinseth Hospitality, said the hotel should open in October.

“The original vision was to do a hospitality project,” Kinseth said. “We focused in on what would fit well downtown. And there was no Hilton Garden Inn. It’s a great fit for what the downtown needed. We had a high rise, and we decided that a world class rooftop bar and restaurant would fit the downtown well, and we hope it will be a great project.“

The planned 12-story building will be capped by the restaurant, which will be the first of its kind in Iowa City.

“The overall idea is to create something unique in Iowa City, a focal point,” said Michael Wilson, the food and beverage manager of the restaurant. “We would like to be the rooftop restaurant of Iowa and the surrounding area.”

The hotel itself is a $34 million project located on 318 S. Clinton St., and, besides the rooftop bar and restaurant, it will feature a pool in the basement, 114 rooms, a fitness room, and other amenities, while the rooftop offers a unique experience.

The Vue features a spacious interior, with a terrace overlooking the south and west sides of downtown. The restaurant plans to have local beverages on tap, Wilson said, and approximately 40 menu items.

Downtown District Executive Director Nancy Bird said she has increased her staff to brace the district for the increased foot traffic from the hotel.

“We want to make sure that the conferences and the people the hotel brings will be well-supported by the downtown,” Bird said.

The rooftop bar and restaurant is being constructed in hopes of integrating it to the downtown experience Iowa City offers, Wilson said.

That “feeling of escape” will be unmatched in Iowa City, Kinseth said, in part because the hotel offers a unique atmosphere and a height advantage that will create the feeling.

“It’s premium space and the best views in Iowa City,” Kinseth said. “It will just be unbelievably cool when it gets opens.”

“Hopefully, it will be the premier rooftop bar in the Midwest and, hopefully, the country,” he said.

The proximity to the downtown gives it an advantage, and Kinseth said he is ready to embrace the traffic.

“I think it’s going to be a big catalyst to the already thriving downtown,” Kinseth said. “There will be a lot more people [from] out of town coming to the downtown.”