Gerrymandering is a serious issue that must be stopped by making redistricting nonpartisan. 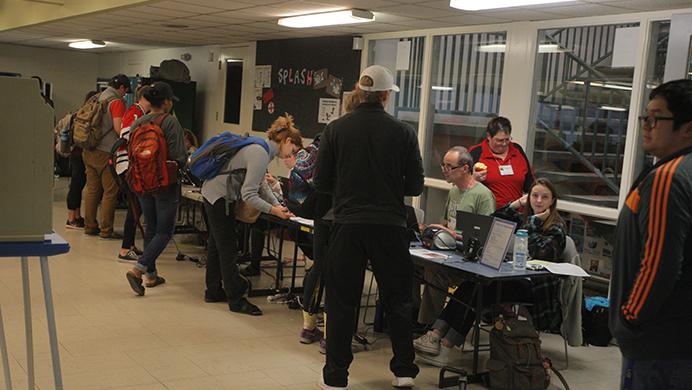 Voters register to vote in the Robert A. Lee Recreation Center in Iowa City on Tuesday, Nov. 8, 2016. Iowa voters could register at their polling places. (The Daily Iowan/Joseph Cress)

Gerrymandering. The practice of deliberately manipulating the boundaries of electoral districts in such a way to privilege a specific bloc. Or to put it bluntly, rigging elections.

Despite the peculiar way in which the term “gerrymander” came to fruition (in 1812, Massachusetts Gov. Elbridge Gerry approved a district that resembled the shape of a salamander, prompting the Boston Gazette to dub it “gerry-mandering”), today, the problem of gerrymandering is more pervasive than ever.

A post 2016 election analysis by the Associated Press has revealed that gerrymandering has created built-in advantages for Republican lawmakers in some states. Based upon vote-share calculations from party-affiliation statistics, Republicans wildly outperformed expectations, gaining 22 additional seats in the House of Representatives following the 2016 elections.

Moreover, researchers say swing states such as Wisconsin, Pennsylvania, and Michigan appear to be responsible for the worst instances of gerrymandered districts. The Princeton University Gerrymandering Project concludes there is only a probability of 1 in 16,000 that the results of Michigan’s state-level House districts were due to chance and a mere 1 in 60,000 chance that the results of Wisconsin’s Assembly district races were due to chance. Meanwhile, the same report details that 13 of Pennsylvania’s 18 congressional districts were won by Republicans, despite voter-affiliation being nearly split 50-50 between the two parties in the state.

It’s easy to wonder how this might happen, or more importantly, how it can be reconciled. To answer the first question, a brief synopsis on districting procedure may be useful. To keep the number of constituents in districts equal, every 10 years after the census is conducted, states are forced to alter both their congressional and state-level legislative districts in the name of fairness; however, there is a caveat. Not all states task the duty of redistricting to a nonpartisan commission, as Iowa does. Some states (such as Wisconsin, Pennsylvania, and Michigan) allow their state Legislatures the authority to draw districts.

And to answer the second query, while there are standards restricting the ability to gerrymander electoral districts along the lines of race and ethnicity laid out in the Voting Rights Act of 1965, there aren’t any laws barring gerrymandering. Thus, without an independent commission to draw the lines, state legislatures can intentionally draw up districts that favor the party in power.

But there may be a glimmer of hope out there for all those who feel disenfranchised by a rigged system. Earlier this year, an appeals court ruled that Wisconsin’s districts were intentionally gerrymandered for partisan advantage after the 2010 census. However, this doesn’t necessarily mean that gerrymandering is now illegal; it simply means that gerrymandering is finally being called into question because in a democratic republic, the constituents are supposed to pick their lawmakers. The lawmakers shouldn’t be able to pick their constituents by rigging a district to favor their party.

Perhaps some states should follow in Iowa’s footsteps and use a nonpartisan commission when devising electoral districts. And if states are unwilling to relinquish the political tool that gerrymandering is, the Supreme Court may put an end to gerrymandering once and for all; it is set to hear the case this fall.