The Iowa Citizens for Community Improvement Action Fund held its ‘Protest to Power’ convention in the Iowa Events Center in Des Moines on July 15. The convention focused on giving power to American citizens by implementing populist policies and actions. 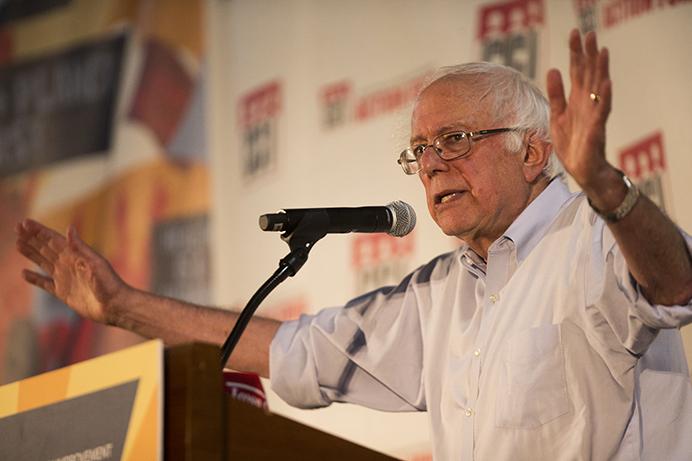 The Iowa Citizens for Community Improvement Action Fund held its “Protest to Power” convention in the Iowa Events Center, 730 Third St., to promote grass-roots activism and taking back the political system by the people.

Community Improvement describes itself as an independent political force that encourages a public debate on populist actions and policies.

Garza led a workshop with Bree Carlson, deputy to the executive directors of People’s Action, titled “From Protest to Power: Where’s My Place in the Movement?” to condemn the nation’s capitalist economic system and discuss the opportunity the current political climate gives to build a lasting movement.

Those involved in Community Improvement believe the economy is purposely made to provide some with benefits and advantages at the expense of others, Garza said.

“The way that our country is organized, we’re told that based on who you are determines whether you work hard or not, whether you’re deserving of things or not, or whether or not it’s your fault that you’re in the position that you’re in, as opposed … a small group of people who are hoarding everything,” she said.

Sanders advocated for the creation of a “vibrant democracy” in which people dominate the system rather than billionaires.

“If we do not get our act together — if people all over this country do not stand up and fight back … there is a real likelihood that the trend toward oligarchy will only intensify,” Sanders said.

One of the ways to advocate for the creation of an economic system that does not exploit certain members of society for the benefit of wealthier people, Carlson said, is to unify and organize. Without an organization, she said, all that will happen is continued protests, and eventually, people will stop believing that the larger system can be fixed.

“I think this isn’t going to work as long as it’s one person; I think it’s going to work when it’s all of us,” she said. “… It does not require a celebrity, but it does require our absolute commitment to building an organization.”

The struggle to improve the economy and make a political system that works for all the citizens it serves, Sanders said, is about the lives of Americans’ children and grandchildren; the fight is for the future of the planet.

“We are going to create a government that works for all of us, not the billionaire class,” he said. “… Our job is to bring our people together — to not let ourselves be divided up.”