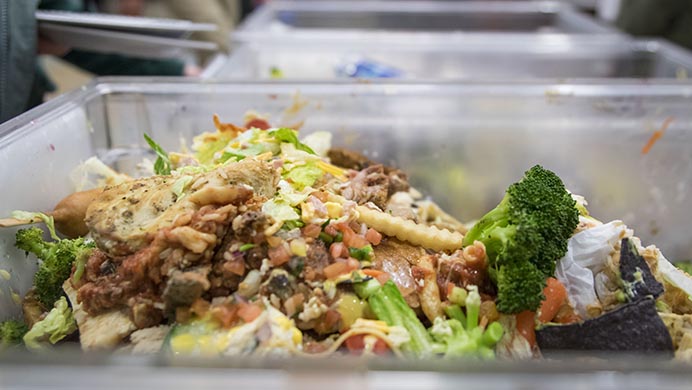 Compostable food waste is tracked in plastic bins at Hillcrest Dining Hall on Wednesday, March 8, 2017. The food is being weighed as part of a food waste audit to measure students' trash.

Food waste adds 18,000 tons each year to the Iowa City landfill; composting and food mindfulness is the solution.

Composting is often invoked as the grossest holy grail of environmentally conscious living. Many are the times I’ve tried and failed to cultivate my own little backyard bin to assuage the pangs of throwing away coffee grounds, onion skins, and eggshells.

My poor roommates have suffered through more than a few seasonal experiments in biodegradation: from summer compost, a slimy, simmering stew of food scraps housed in a plastic bucket and tucked under the table to winter compost, a collection of Ziplock bags in the freezer masquerading as leftovers. True story. But despite the mess, composting is a crucial practice. Before you even think about starting your own pile or bin or bag, however, consider your eating habits and fight food waste at its source.

Obviously, the equation is a simple one. How we purchase, use, and discard our groceries changes what we throw away, and where. Waste management starts at the store, the kitchen counter, and the dinner table. Food waste makes up 15 percent of the local landfill, adding 18,000 tons each year to the other junk, according to a study from the Iowa City Landfill and Recycling Center.

Local organizations such as the New Pioneer Co-op know this all too well. Genie Maybanks, store-tours guide at New Pi, says farmers have been picking up produce waste from the store since the 1970s. The Co-op also encourages employees to take home produce that’s “ugly,” thereby saving “an immense amount of food waste.” Also, New Pi uses as many compostable corn plastic items as possible, such as deli containers, produce bags, and utensils. Just this year, New Pi created 24,306 gallons of compost.

RELATED: Food as food for thought

And it’s not just a philanthropic venture. Maybanks said composting ultimately helps the Co-op sell better products: If the farmers enrich their soil with compost, the crops they grow will flourish. However, the Co-op does not have a streamlined system available for community-wide composting. The best you’ll get by way of compost collection are the Dumpsters out back, which is a start.

If you’re not a farmer or a New Pi customer (though you certainly should become the latter), the city of Iowa City has created a Curbside Composting initiative open to the entire community. It’s brand-new, as of March, and recycling coordinator Jennifer Jordan said city-provided containers will be available this coming fall. Stay tuned — look for Iowa City representatives at the Farmers’ Market and check out social media for more information.

The Iowa City government website offers excellent tips on how to avoid excess food waste, plus a video on how the composting process will work this fall.

The best advice on that entire site is a food journalist Michael-Pollan-esque aphorism: “Buy fresh ingredients in smaller quantities more often.” It’s a trendy term, but mindfulness is the foundation of the food-waste discussion. Waste reduction arises from conscious consumption, meaning, in other words, thriftiness. These principles aren’t for the boujee. In fact, folks with low incomes benefit from reconsidering food use. Make the most of your grocery budget, and stay savvy about your shopping habits. Know what you’re buying, why you’re buying it, where it comes from, and where it’s going. Embrace the entire food cycle — apple cores, spotty tomatoes, wilted greens, and all.