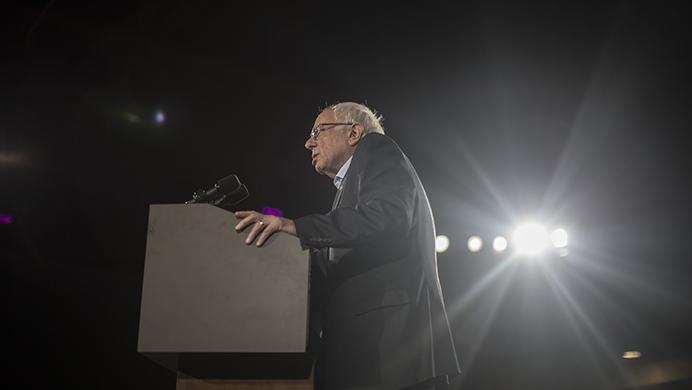 FILE - In this file photo, Sen. Bernie Sanders gives a speech during a campaign event in the Fieldhouse, on Saturday, Jan 30, 2016. Sanders will be making a return to Iowa City in August as part of a tour to discuss his new book. (Jordan Gale/The Daily Iowan, file)

Sen. Bernie Sanders, I-Vt., will be making a return to Iowa City in August as part of a tour to discuss his new book.

Iowa City’s famed independent bookstore, Prairie Lights, 15 S. Dubuque St., has announced it will bring Sanders to Hancher Auditorium, 141 E. Park Rd., on Aug. 31. at 7 p.m. after the release of his book, Bernie Sanders Guide to Political Revolution, according to a press release.

The release said Prairie Lights was one of the few bookstores Sanders and Macmillan Publishers selected to host an event on the tour to promote the book, which is published by Henry Holt Books for Young Readers.

“In this new book Bernie Sanders Guide to Political Revolution, presidential candidate and activist Bernie Sanders continues his fight against the imbalances in the nation’s status quo, and shows how to make a difference to effect the changes America — and the world — need to create a better tomorrow,” the release said.

$30 tickets (limited quantity) include a signed first edition copy of the book
$25 tickets include an unsigned copy
Tickets for those 16 years of age and under will be $10 and will not include a copy of the book
Books will be available for sale at the event.