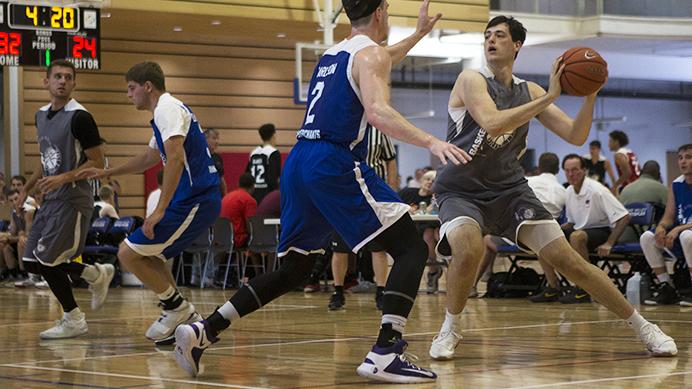 Iowa's Ryan Kriener looks to pass to a teammate while being covered during a Prime Time League basketball game in the Cedar Valley SportsPlex in Waterloo on Thursday, June 29, 2017. Kriener had 13 rebounds and 19 points. (Joseph Cress/The Daily Iowan)

Over the course of a long college season, most players on a team tend to build relationships not only on the court but off.

That holds true for two Hawkeyes as well.

Ryan Kriener and Jordan Bohannon have been friends for around five years, having met playing AAU basketball in middle school.

Their friendship has not only grown but evolved over the past few years.

For the past two years, they have been roommates, and this summer, they were lucky enough to be drafted by the same Prime Time team.

“He’s a great guy,” Kriener said about Bohannon. “We’ve just kind of had a bond ever since we started playing together because our styles match pretty well.”

Both want to build on solid freshman campaigns. Bohannon won the starting point-guard position and instantly became a regular go-to guy on the court, averaging 10.9 points and 5.1 assists per game.

Kriener, on the other hand, averaged only eight minutes per game while putting up 3.1 points with 2.2 rebounds, but it is evident that he is working on the little things to get ready for next season.

“[Kriener and I] love to see each other have success, and that’s kind of like the story of our entire team,” Bohannon said. “It helps that I’m on [Kriener’s] team [this summer]. It allows us to work on pick-and-rolls and other stuff that without practice we wouldn’t be able to do as well.”

The duo has enjoyed some success on the court this summer; their team, L.L. Pelling, has a 3-1 record.

Both have put up impressive numbers this summer, with Bohannon averaging 28.5 points, 6.8 rebounds, and 4.8 assists. Kriener has averaged 25.8 points, 11.3 rebounds, and 4 assists.

Both have received plenty of game time to showcase their abilities. They had impressive performances in their last outing, June 29, in which Bohannon put up 29 points with 5 rebounds and 5 assists, and Kriener wasn’t far behind with 19 points, a whopping 13 rebounds, and 6 assists.

They led their team to a 95-87 victory over Vinton Merchants and Iowa teammates Brady Ellingson and Jack Nunge.

“It’s kind of unfair that they’re teammates with the chemistry they have out there,” Ellingson said after the game. “But they’re really great guys, and they make a great team.”

Bohannon and Kriener may appear to have a perfect friendship, and with all relationships, each has a peccadillo or two.

“He loves to chew loudly; that really annoys me,” Bohannon said. “And he does some really weird stuff sometimes. Like I was in bed at 1 in the morning, and I hear him get up in the kitchen and I’m thinking, ‘Ryan, what are you doing?’ And he’s cooking some food, and I’m like, ‘Ryan, just go to bed.’ ”

On the other hand, Kriener believers that Bohannon can be overly competitive.

“When he plays 2K, he gets in such a zone that you can’t talk to him,” Kriener said. “He loves 2K so much, he plays probably like half the time we’re home.”

The two hope their bromance can continue next season, and both hope they can come back as better players.

Bohannon has worked all summer on his defense and dribble penetration, hoping to keep his starting role.

Kriener has focused on his outside scoring and ball handling this summer, saying he wants to try to become more of a stretch 4.

“[This off-season], I wanted to work on a lot of ball handling and catch-and-stoop stuff,” Kriener said.

Bohannon and Kriener hope their friendship and on-court success will continue, and both hope to be staples in the Hawkeye rotation for the next few years.