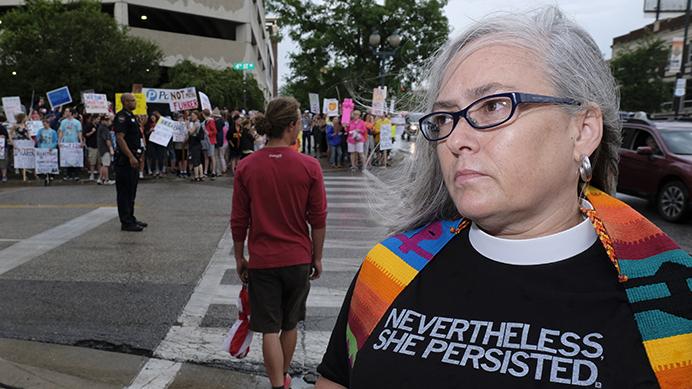 Kirstin Hudson, a Presbyterian Pastor from Cedar Rapids greets supporters of Donald Trump who are attending a rally in Cedar Rapids on Wednesday June 21, 2017. Hutson said that she was praying for the people attending the rally and that she thinks "the assertion that Trump somehow represents Christian values is so misplaced." (Nick Rohlman/The Daily Iowan)

CEDAR RAPIDS — Rain rolled into Cedar Rapids on the evening of June 21, but that didn’t stop hundreds of President Trump’s supporters and anti-Trump protesters from attending the event and standing outside in line or in crowds throughout the scattered showers.

Numerous groups protested the rally, including Indivisible Cedar Rapids, Americans for Democratic Action, and Action Iowa. The protesters stood outside the Doubletree Hotel, the location of the U.S. Cellular Center and organized a walkout at the beginning of the rally as well.

“We’re here to protest against a destructive administration,” she said. “Trump has alienated many people, and we want to bring those people together.”

Adams said she thinks having a rally in Cedar Rapids is a way for Trump to receive praise.

“Trump hosting here falls under the guise of Branstad leaving,” she said. “I think he wants to continue the patting on his back that he’s received from campaign rallies. He’s not a politician. He’s a celebrity, and that’s how he’s been acting.”

Elizabeth Dinschel, the state leader of Action Iowa and organizer of the walkout, said every time Trump travels to Iowa, her members will protest.

“So many things are going wrong,” she said. “[The Trump administration] just turned into an extended protest against Obama. They’re just trying to undo what Obama did, and they hate him, and they don’t even know why.”

Dinschel said the walkout went as planned, but the group faced some backlash.

“I got hit in the face twice during the walkout. Once by a man and once by a woman,” she said. “This is the second walkout we’ve organized. They deserve to know we’re fighting this and going to keep fighting this. We’re not a bunch of hillbillies supporting Trump. We’re not OK with this.”

Trump supporter Mervyn Cousins said he believes the protesters have a right to protest.

“It’s their right for sure,” he said. “But we finally have someone in office to stand up and do what’s right. He gave up a billionaire lifestyle to get all the flak he’s getting today. He knew people were going to come after him constantly, but he knows how to stand up.”

Suzanne Moore, one of the many protesters

attending the event, said she was born with a condition called Ehlers-Danlo Syndrome, which affects the connective tissue in the body. She’s worried about some of Trump’s policies, she said, including his plan to get Congress to repeal the Affordable Care Act.

“Trump wants to take away my insurance, but that’s how I survive,” she said. “My daughter has the same condition, and is only 15, and has to grow up in this world. It’s hard enough having the stigma of being young and disabled without Trump making fun of us. We didn’t choose this path. It was chosen for us. It is what it is, and I’m just trying to survive.”

Trump supporter Tonja Barnes brought a Confederate battle flag as well as the American flag to the protest and walked around with them. Some protesters were not happy at the sight of the Confederate flag.

“I am an American, and it’s freedom of speech,” she said about carrying the flag. “I laugh when they call me racist. They want to judge me for the flag I’m carrying and not the person I am. Confederate soldiers were considered American veterans, so it’s also an American flag.”

Kim Schmitz, a protester and UIHC pharmacist, said she’s seen firsthand how the Affordable Care Act has helped so many people.

“It’s helped many people afford medications that people didn’t think they could afford,” she said. “I’m fighting for those people who will potentially lose essential medical benefits.”

“We are not the people who committed the crime this past week against the congressmen,” she said. “That’s not who we are. We are peaceful people.”