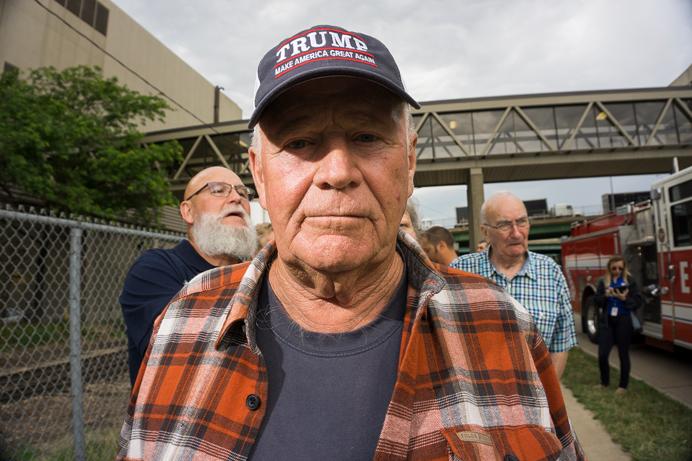 A Trump Supporter poses for a portrait near the Donald Trump rally in Cedar Rapids, Iowa on Wednesday, June 21, 2017. The arena was filled to capacity and many of the supporters had to be turned away. (James Year/The Daily Iowan)

CEDAR RAPIDS — In his first visit to the red state of Iowa since being inaugurated five months ago, President Trump vowed to fix the economy.

Trump spoke of fulfilling campaign promises to an enthusiastic crowd at the U.S. Cellular Center Wednesday night, assuring his supporters he would solve the nation’s problems — after all, Trump told the crowd, “that’s what you put me here for.”

The 45th president of the U.S. said he has been dealt a “very difficult hand” because of the money that has been spent on the wars in the Middle East and southern Asia since 2001, but Trump said he is determined to rebuild the nation. According to a report from the Congressional Research Service in 2014, $1.6 trillion has been spent on the wars in Afghanistan and Iraq as well as other global post-9/11 counterterror operations.

So far, Trump said almost $4 trillion in “tremendous” wealth has been generated, referring to reports from U.S. Commerce Secretary Wilbur Ross’ regarding stock-market gains of that amount since January.

“After spending billions of dollars defending other people’s borders, we are finally going to defend our borders,” Trump said. “After decades of rebuilding foreign nations all over the world, we are now rebuilding our nation.”

Rep. Pat Grassley, R-New Hartford, who spoke to the rally before Trump took the stage, said people admire Trump for how he represents America through his interactions with other nations.

“When it comes to President Trump, I think that one of the things that we all admire about him is that he does not travel around the world and apologize for America’s greatness,” Grassley said. “… We are a world leader, and [Trump does] not tear us down in front of other countries.”

For Trump voter Jim Lendherr, the president’s background as a businessman is also promising.

“One of the big things is, there’s so much government in everything,” Lendherr said. “It’s unbelievable how much people have to spend, you know. Banks have a couple people on their payroll just to keep track of all the government regulations — all the regulations really hinder business development.”

“Jobs are just about the best they’ve ever been,” he said.

According to data from the Bureau of Labor Statistics, since January, unemployment fell from 4.8 percent to 4.3 percent in May. The lowest it has been since 2001 was 4.2 percent in January and February 2001.

Bret Nilles, the chairman of the Linn County Democrats, said he did not believe Trump’s claims of reviving the country from the “terrible state” it was in when he took office.

“Now that Trump is inaugurated, the economy is on the rise, unemployment is low, and jobs are occurring at close to 200,000 per month,” he said. “From the standpoint of saying that he came into the economy in a position where it was a disaster is absolutely false.”

Trump voter Jamie Mapier, however, said she approves Trump running the country like a business.

“I voted for him because we need to change our deficit, and he’s a businessman,” Mapier said. “I’ve said for years that America needs to be run like a business, because that’s what we are.”

Jeanette Dennis, who also voted for Trump, said his promise to put Americans back to work was one of the primary reasons Trump got her vote.

“[I knew] that this country was going to go back to where it needed to be after eight years of [the Obama administration’s] corruption,” Dennis said.

When it comes to his administration, Trump said, his biggest proposals — which he hopes will include taxes, health care, and infrastructure — have yet to come.

In addition to his proposals, Trump said his administration has also completed several resolutions to eliminate the “job-killing” regulations on American workers, companies, and farmers.

“We are ending the federal intrusion into your family farms and your ranches, and we’re also working very, very hard to get rid of the death tax,” Trump said. “You should have a right to pass your farm onto your children and onto your grandchildren — you should have that right.”

Trump told crowd members that their children should be able to hold family property without borrowing a fortune, making payments, and eventually losing said property to banks.

“No matter our beliefs, no matter our party, it’s time for us to remember that we’re all Americans, and we’re all in this together..” @potus