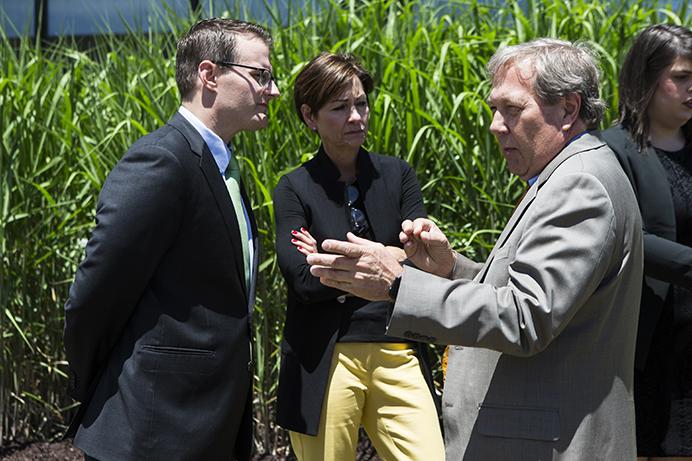 University of Iowa President J. Bruce Harreld, right, speaks with Lt. Gov. Adam Gregg, left, and Iowa Gov. Kim Reynolds, center, during a visit on the University of Iowa campus to learn about diversifying biomass fuel sources on at the Cambus Maintenance Facility on Wednesday, June, 7, 2017. Reynolds and Gregg met with President Harreld and other university experts on their visit while discussing the university's biomass portfolio. (The Daily Iowan/Joseph Cress)

When new Iowa Gov. Kim Reynolds visited the University of Iowa earlier this month, she noted that, for years, Iowa has prided itself in leading the nation in renewable energy.

But when President Trump announced the U.S. withdrawal from the Paris Climate Accord earlier this month, and when most Iowan Republicans stood behind the decision, an open dialogue about Iowa’s long-kept history of renewable energy resurfaced.

In her visit to the UI to discuss campus biomass initiatives, Reynolds, a Republican, said she wanted the state to continue to lead in renewable energy.

“Since the ’80s, we’ve led the nation in renewable energy and fuels,” Reynolds said. “Not only do we feed the world, but we fuel the world.”

But in addition to leading the nation in renewable energy and fueling job growth, Reynolds also said she will lead an all-Iowa farm trade mission to China in July, which she hopes will serve as another opportunity for Iowa to bring investment to the state and to grow its market share for Iowa commodities.

For Sen. Joni Ernst, R-Iowa, and Sen. Chuck Grassley, R-Iowa, Trump’s decision to withdraw the U.S. from the Paris Accord was not about renewable energy or climate change; rather, it was about former President Barack Obama’s entrance into the agreement without congressional consultation.

At her third-annual Roast and Ride earlier this month, Ernst said whether she agreed or disagreed with Trump’s decision to withdraw the U.S. from the agreement was no longer relevant.

“President Obama entered into [the accord] without going through Congress,” Ernst said at the event’s press conference. “So this president had the opportunity to come out of that agreement without Congress.”

Similarly, Grassley said the Paris Climate Agreement resulted in no enforceable pledge from nations to limit their emissions (the pledges are voluntary). The allegedly unequal terms, he contended, put the U.S. economy at a significant disadvantage while letting large economies such as China’s and India’s off the hook.

“If followed, the agreement would likely cause serious job losses, with economic harm to U.S. businesses, manufacturing, consumers, and farmers, with little to no impact on the global climate,” Grassley said in an email statement to The Daily Iowan. “Meanwhile, I’ve been and will continue to be a strong supporter of policies advancing cleaner, domestic energy in the U.S. Senate.”

Grassley said he believes the laws have helped the nation make progress in Iowa before the Paris Accord.

“I welcome the president’s interest in getting a better deal for Americans,” Grassley said. “Efforts to achieve fairer terms for the United States deserve praise.”

For Ernst, the president’s decision to withdraw from the accord shows how strong America is as a leader in clean energy without government mandates.

“We continue to move forward in clean-energy sources,” she said. “Iowa is a leader in clean energy and renewable fuels, and I remain optimistic that we’ll continue to be a leader and show the nation the way forward, so I think that we will continue to push those initiatives with or without Paris — we will be a leader; the United States will be, too.”

Ernst said that with the nation’s market-driven system, customers are demanding clean energy, which causes U.S. businesses to engage in clean energy without government interference.

“Here in Iowa is a great example of using solar energy — using wind energy especially, you see ‘windmills’ going up all the time — we see our biodiesel and corn ethanol production that has been very, very valuable to our [agricultural] economy,” Ernst said. “So we’ll continue to push those initiatives — believe me.”

The DI reached out to the office of Rep. Dave Loebsack, D-Iowa, but did not receive a response.