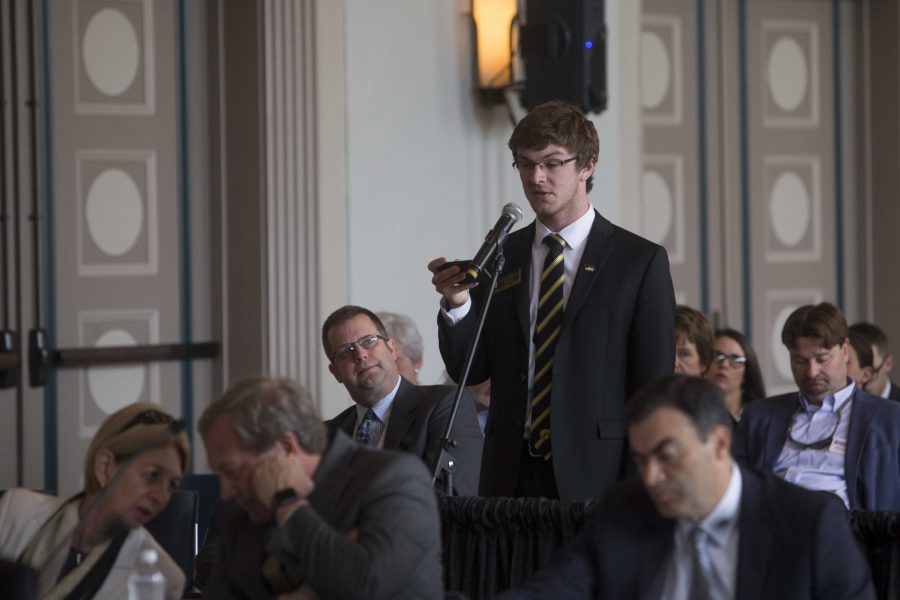 UISG president Jacob Simpson addresses the Iowa Board of Regents on Thursday June 8, 2017. Simpson called for transparency as the Board of Regents debates tuituion increases. (The Daily Iowan/Nick Rohlman)

CEDAR FALLS — As public support for Iowa’s universities governed by the state Board of Regents is on the decline, postsecondary academic institutions are ramping up their financial-aid offerings to students.

The regents’ report revealed that as the institutions’ financial-aid awards rise, students graduating from the universities are seeing a drop in indebtedness upon their departure.

Jason Pontius, the regents’ director of institutional research, said at the regents’ June 7 Academic and Student Affairs Committee meeting that more than $1 billion was awarded to students. He noted a decline in the percentage of that money coming from the federal and state governments.

Although the report shows a decline in student loan debt, likely thanks to the boost in financial aid, the fiscal 2017 midyear budget cuts cast a shadow on the UI’s affordability down the line.

UI President Bruce Harreld said in a February interview with The Daily Iowan that philanthropic efforts to raise money will contribute to scholarship programs as time goes on. Through donor money, the UI funds scholarship programs, research, and other major university programs or initiatives, so long as it aligns with the donor’s wishes.

The UI announced in February its nearly $2 billion For Iowa. Forever More. fundraising campaign total; of that amount, $52 million will be put toward student financial aid, according to campaign documents.

“… Research institutions are being — we’ve had this conversation — funded less and less by the state and federal government,” Harreld said. “They need to have their own fiscal bottoms, and … I think moving forward, we’ll be more and more dependent upon philanthropy.”

Despite these contributions from philanthropic efforts, private donations do not entirely replace the money the state provides through appropriations.

Harreld announced in February that the UI would eliminate certain scholarships, mostly ones that contributed to legacy students, as one way of responding to the midyear budget cuts.

“So we ended up realizing that since 2014, we put into the system of scholarships that were not need- or merit-based, and so we actually went in and said we need to take those out,” he said. “… So then, could we replace those? Of course. We raised in this last campaign a number of specific dollars for scholarships. Should we do more of it? Absolutely, we should do more of it. We actually spend every dollar that we get for scholarships against scholarships.”

“I think that the bigger question is continuing to make sure we use that money wisely and refining and improving to identify specific students who need it,” he said.

Prior to the regents’ approval of a tuition hike, UI Student Government President Jacob Simpson said in a statement at the regents’ June 8 meeting that neglecting to determine who will be able to access and afford a UI education would lead to barriers between the UI and incoming low-income or unrepresented students, echoing Harreld’s sentiment.

“Maintaining accessibility, affordability, and quality will be critical to the development of the tuition plans,” Simpson said. “… The University of Iowa is already more accessible and affordable than its peers, and we know that we must be cautious with increases in tuition as they will decrease access and affordability.”

Simpson encouraged the UI to use financial aid as a mechanism to provide accessibility and affordability for students burdened by rising tuition.