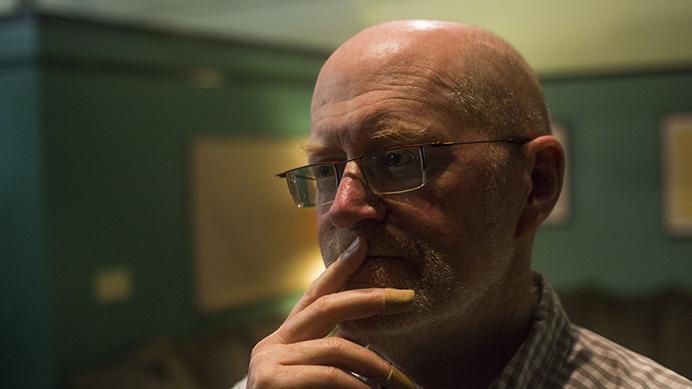 Mayor Jim Throgmorton is seen inside Fair Grounds Coffeehouse on Monday, June, 12, 2017. Throgmorton along with the Johnson County Board of Supervisors agreed to commit to the Paris Accord. (The Daily Iowan/Joseph Cress)

Iowa City and Johnson County have united with other local governments nationwide to continue climate-change action.

Since President Trump announced his intent to ditch the Paris Climate Agreement on June 1, Iowa City Mayor Jim Throgmorton and the Johnson County Board of Supervisors have agreed to uphold the principles of the agreement.

The Paris Accord is an international pact to reduce emissions of greenhouse gases to keep global temperatures from rising more than 1.5 degrees Celsius above pre-industrial levels. An increase of 2 degrees or more could be detrimental to several Earth processes, according to NASA.

At their June 8 meeting, the supervisors unanimously passed a resolution committing to the principles of the Paris Accord in spite of Trump’s announcement.

“We hope other counties will sign on as well,” Supervisor Mike Carberry said. “Since the president and the country aren’t going to show leadership, then local governments have to do it — cities, counties, maybe even states.”

After receiving the Iowa City City Council’s blessing on June 6, Throgmorton signed two separate letters reaffirming Iowa City’s commitment to climate action. One was written by the Global Covenant of Mayors for Climate & Energy and the other by the Climate Mayors, which was signed by 292 U.S. mayors.

“In terms of what the U.S. as a whole does, does it matter what Iowa City does?” Throgmorton said. “No, I don’t think it matters, but if you combine all these cities in the United States … that adds up. It feels very powerful to me to know that what we’re doing is being done in affiliation with so many cities and mayors around the world … It gives me a sense of working for the common good together with millions of people.”

Throgmorton said nothing new will come out of the letters in terms of new ordinances or resolutions, but they reaffirm initiatives the council has put forth, such as creating a climate action steering committee and setting a goal to reduce greenhouse-gas emissions by 80 percent by 2050.

Iowa City sustainability coordinator Brenda Nations said this particular set of city councilors is more progressive, and climate action is something the council feels strongly about.

“We can’t expect someone to do it for us; we have to do what we can do in our community,” she said. “It is dependent on everyone else making the same commitment, and not everyone is, but I think it will make a difference overall … Everybody has to be accountable.”

Throgmorton said he has been criticized over not acting quickly enough to address climate change. However, he said the process is more complex.

“It is no easy task to figure out how to reduce our carbon emissions and how to adapt wisely to changes in climate,” he said. “We have to make sure people in businesses and in the city are on board — we can’t just say we’re going to do it, impose our will. We’ve followed a very deliberate process to do the best we can to make sure that businesses and the people of Iowa City are on board.”