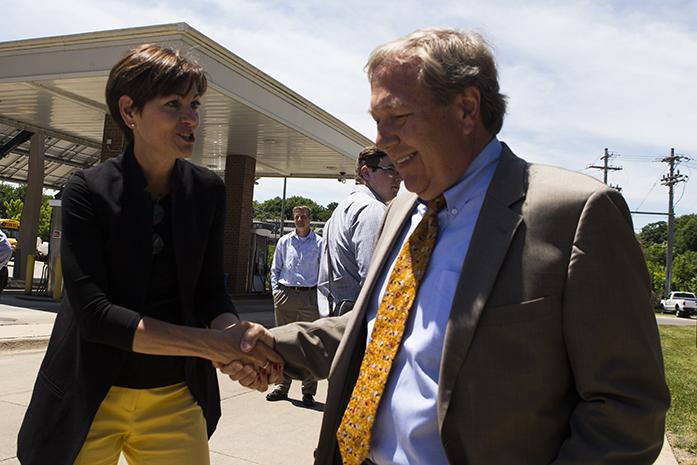 Iowa Gov. Kim Reynolds shakes hands with UI President Bruce Harreld after a visit on the UI campus to learn about diversifying biomass fuel sources on at the Cambus Maintenance Facility on Wednesday, June, 7, 2017.

Iowa not only feeds the world, it also fuels it, Gov. Kim Reynolds said during a visit to the University of Iowa on June 7.

Because of this, Reynolds said, she wants the state to continue to lead in renewable energy.

Reynolds and acting Lt. Gov. Adam Gregg visited the UI’s miscanthus energy grass on the south side of the Cambus Maintenance Facility.

The grass is harvested annually and co-fired with coal to produce energy in the UI Power Plant.

“There are so many opportunities with the research that’s going on here at the University of Iowa and across the state,” Reynolds told The Daily Iowan.

“[This goal is] very aggressive, but [the UI] feels confident with the update that they gave us today that they can meet that,” Reynolds said. “So this is an opportunity to take these best practices, and help really scale them, and educate other areas across the state on an example of using renewable energy.”
Related: Miscanthus project marches on
As she works on the state’s comprehensive energy plan, Reynolds said, she is also searching for innovative ideas with biomass and biogas.

“[Biomass and biogas are among the] areas we highlighted in the state energy plan,” she said. “This is an opportunity — it’s like a pilot program that we can find out what worked, what didn’t, what were some of the barriers. We were just asking how can we better connect what you’re doing to really implement a plug-and-play for other areas across the state.”

Reynolds said by turning crops into fuel, agriculture becomes more valuable. This is important, she said, given the depressed commodity prices for farmers.

“[State officials] are putting those options together right now, [so] we’re not going to speculate on what that’s going to look like, because I don’t know right now — it fluctuates from day to day,” she said. “In the meantime, we’re going to continue to look for opportunities to grow the economy.”

“We lead the nation in ethanol and biodiesel,” she said. “And here’s an opportunity with our natural resources and the tremendous amount of biomass we have in the state of Iowa to continue to add value to our economy by using the byproducts just like the grass that we’re standing in front of now to really look for opportunities to replace coal with renewables. We think there’s great opportunity there.”